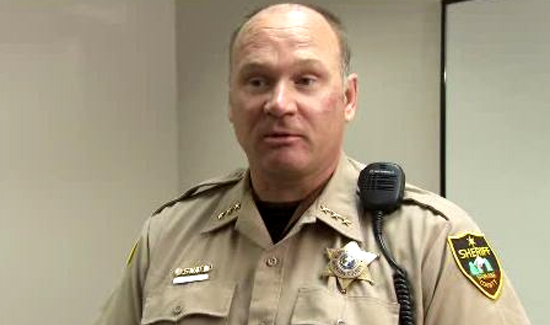 Spokane County Sheriff Ozzie Knezovich (pictured above) was flabbergasted Saturday night when he says he tried to enter the Spokane Chiefs game at Spokane Arena to promote a charity hockey game and wasn’t allowed inside.

The sheriff tells us he is always on duty, so he always carries his gun with him. But when he tried getting into the Spokane Arena Saturday, he was told by the security that he would have to take off his gun and leave it in his car because of a policy they have in place.

“This is bureaucracy and bureaucrats run wild. I’ve never sen anything quite like this,” Sheriff Knezovich said. The sheriff says he plans to ask the board that operates the venue why he has to be disarmed because he says, “It makes zero sense.”

“I can understand if we are off duty, if there’s liquor being sold there, I can understand that. But when you are on duty and representing the county at an event, I’ve just never heard anything like this,” Sheriff Knezovich said, ” Many, many of the active shooter type situations that happen in this nation have been stopped by off duty police officers carrying their weapons.”

KHQ reached out to the Spokane Arena for comment and has not heard back, but we do know they have been implementing new security measures like metal detectors and have also put a new policy in place banning firearms. The arena’s policies can be read in full here.

Not allowing off duty officers inside of an event with their firearms is just a dumb idea. We in law enforcement are NEVER OFF DUTY. We will protect life no matter what is happening we are LAW ENFORCEMENT officers AND PROUD OF IT. I would not attend any event where I was not allowed nor could not carry my weapon. I have put to many actors in jail/prison who have stated that when they get out they will get me and or my family. If you don’t want our money then that’s fine by me and my family.