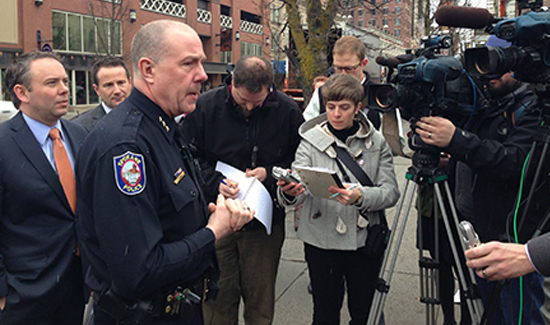 Sheriff expresses shock over the developments

Spokane Police Chief Frank Straub suddenly resigned this week. His surprise move comes after trouble escalated for the embattled chief following a September meeting where some members of the Spokane Police Department submitted letters summarizing their concerns about his management style.

According to a story on KREM.com, city leaders officials confirmed Straub will be reassigned to the City Attorney’s Office for now and will leave city employment for good on January 1, 2016.

Many people came forward with specific examples of unprofessional and hostile behavior by Straub toward others. Leaders said the behavior dated back two years and included profanity, personal, degradation and “other behavior not becoming the office of Spokane Police Chief.” They said Straub’s conduct was demeaning and created a hostile work environment.

Over the past few weeks, the Police Guild and members of the Lieutenants and Captains Association said they have held three meetings for members to voice concerns about Straub’s degrading treatment. A letter sent to the City Attorney on behalf of these groups stated, “These actions taken by the Chief of Police, in his official capacity, against subordinate members of this agency constituted a pattern of behavior dating back over two years. It often included profanity, personal degradation, or other behavior not becoming the office of the Spokane Police Chief.”