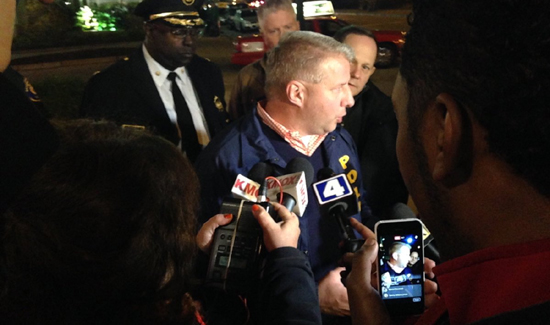 St. Louis Police have killed a gunman they say ambushed an officer in a shooting on Sunday.

The shooting happened hours after a Texas cop was ambushed in a fatal shooting. Police there are still searching for a suspect.

One officer, a 46-year-old sergeant and 20-year veteran of the force, was shot twice in the head but is expected to survive.

The suspect, who fled the scene, led police on a manhunt that lasted into Monday morning. The St. Louis Police Department had called in special operations forces, SWAT units and helicopter units to assist in tracking down the gunman.

Hours later, authorities fatally shot the gunman after he opened fire at officers. No other officers were injured.

According to Dotson, the wounded officer’s gun was still in a holster as the suspect pulled alongside the vehicle.

The officer, who looked to his left, told investigators he saw the muzzle flash and felt the glass window shatter against him.

After the shooting, the wounded sergeant called 911 dispatch on his radio. Soon, first responders arrived at the scene of the shooting and transported him to a nearby hospital.

The officer was unable to provide details about the shooter, Dotson said.

Earlier in the day Sunday, a San Antonio police officer was fatally shot during a traffic stop.

To take precaution against further attacks, Dotson said all St. Louis officers will be partnered up on patrol for the foreseeable future.

St. Louis Mayor Francis Slay, noting that the officer was a husband with three children, said the officer “didn’t deserve this.”

“This is traumatic for him, his family, the city of St. Louis,” Slay said.

In a series of tweets, Missouri Governor Jay Nixon expressed his support for the officer and called the attack a “reminder of dangerous job law enforcement officers have each day in protecting us.”]