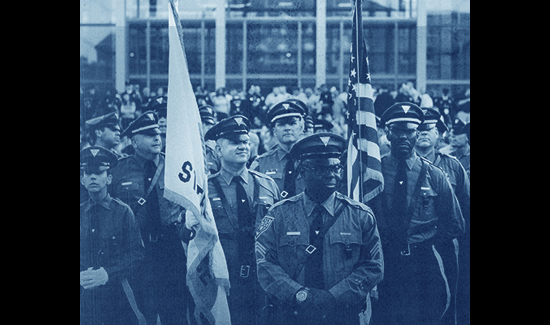 The National Law Enforcement Museum at the Motorola Solutions Foundation Building is under construction in Washington, DC, and scheduled to open in the fall of 2018. In addition to the many exhibits, the Museum accurately depicts the past, present, and future of law enforcement. The Museum’s Stand with Honor campaign is an important element of the Museum and will highlight the stories of Honor Alliance members. These stories of courage and compassion are important in providing visitors with a better understanding of law enforcement and the daily challenges faced.

As Museum construction inches closer to completion, stories are beginning to roll in from Honor Alliance members across the country. You can read the stories that have been collected here. When completed, the Museum, its exhibits, and stories will serve as a living legacy to law enforcement.

Stories vary from those who recount their toughest hours on the job to memorializing a fallen colleague. One officer, who served on a special response team, says that his toughest days were dealing with infants who “passed away in my arms from vehicle accidents to SIDs and other causes.” He shares that the “names and faces (will) always live with me.” He goes on to suggest that “the greatest lesson one could teach young officers is to be compassionate to others. Treat them like you would want to be treated, you never know what they have been through and have never walked in their shoes.”

There are stories from special agents in U.S. Immigration & Customs Enforcement and other government agencies, sheriffs, police officers, as well as those who have served in the military. One story is written in honor of a fallen officer and suggests, “Be true to yourself. Your family is always first and be good to your people.” Other law enforcement officials, including retirees, share stories of their work with children including high school kids working to eliminate gangs and making their communities better places to live.

In addition to written stories, there are also videos. An officer, who is president of a local chapter of the Police Unity Tour, recounts the heroism of a fellow officer who lost her life helping a stranded motorist. The officer was technically off duty and on her way home. She could have just called-in the motorist needing assistance, but instead she stopped to help. When another passing motorist hit a patch of ice and spun out of control, the officer became pinned between the two cars. When emergency units arrived, they knew that she was dying. Her fellow officer, who recounts the story, states that it was just like this officer to go out of her way to help people and “that’s what Stand With Honor means.”

The National Law Enforcement Museum will collect and share as many real stories of honor from law enforcement officers as possible in order to memorialize their dedication and sacrifice. The Museum is a place where officers can make a difference in telling the story of law enforcement history. Please visit StandWithHonor.us and join today.