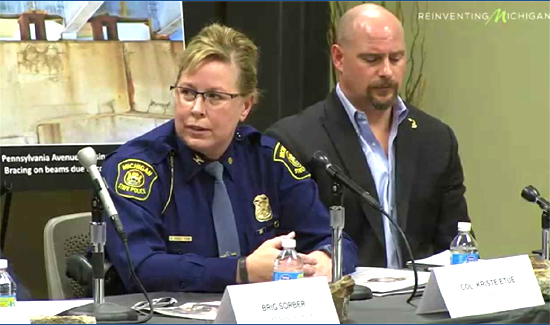 Via The Detroit News:

When she decides to retire, Michigan State Police chief Kriste Kibbey Etue will leave the force with more than a half-million dollars and a $141,300 annual pension, according to a state document obtained by The Detroit News in an open records request.

Etue has earned more than $502,000 in extra pension benefits that she could start receiving next year in addition to her six-figure salary, a document from the Department of Technology, Management and Budget shows. Critics at the free-market Mackinac Center for Public Policy in Midland call the practice “double dipping.”

The additional pension benefits have taken on significance since the Detroit branch of the NAACP, the American Civil Liberties Union of Michigan and others have called for Etue’s firing or resignation.

They urged the action after the state police chief shared a social media post Sept. 24 on her private Facebook page ridiculing “degenerate” professional football players for silent protests of racial injustice during the national anthem.

Gov. Rick Snyder has refused to fire Etue after the controversial the post for which Etue apologized, and has already committed to reappointing her in February. But late last week he docked her five days pay for violating the state police’s social media policy — the most severe punishment allowed.

Rep. John Cirkun, D-Roseville, said he doesn’t think Etue should earn such a high amount of extra pension benefits compared with other state troopers who are risking their safety to do their job. The former Wayne County deputy sheriff called the $502,152 an “exorbitant” amount.

“I’m talking about the troops on the street, they risk their lives every day. … When you’re an administrator, you fall in a whole different category,” Chirkun said. “You’re not down in the freeway ditches on an everyday basis.

“There’s a big disconnect there.”

Pensions are antiquated and need to upgrade to current 401k and HSA accounts.