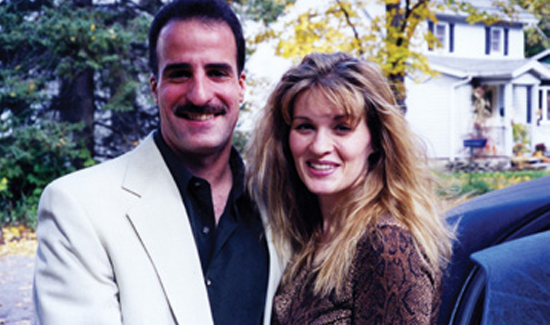 Valentine’s Day is coming up, so we thought we would take the opportunity and share the gripping love story of Ann-Margaret Lyons and Pete Tetukevich, who met when they were both assigned to the NYPD’s Emergency Service Unit, the NYPD’s 400-strong SWAT team.

It wasn’t love at first sight, but pretty close. Among their many extraordinary adventures, Ann-Margaret and Pete were among the first officers to respond to the massacre at Freddie’s Fashion Mart in Harlem where seven people were gunned down or burned to death by a lone assailant. It would take months before they fully realized it, but the incident at Freddie’s would have dire consequences for them as police officers.

Over the next several days, we will post their story, which appears in the pages of Brave Hearts: Extraordinary Stories of Pride, Pain and Courage by American Police Beat publisher Cynthia Brown. Here is Part I.

When Love Crashes In: The Story of Ann-Margaret Lyons and Pete Tetukevich

It was a clear, dry night in the early fall of 1985. Pete Tetukevich and his partner had just grabbed coffee before they hit the streets for their eight hour, midnight to eight am shift, patrolling one of New York City’s most crime-ridden public housing projects.

The four 30-story apartment buildings at 155th Street and 8th Avenue, in the heart of Harlem, had been built on top of the Polo Grounds, the storied field that was home to the New York Giants and their dedicated fans from 1883 to 1957. By the 1980’s, the cheers of thousands of people rooting for their favorite baseball team were a distant memory. Embattled residents had no time to enjoy sports. They were doing their best to cope with the robberies, burglaries, and murders that were destroying their neighborhood.

Pete, like the other cops who patrolled the area, rarely had a quiet night. On a typical shift, he might have to lock up people who were carrying a gun without a permit, break up marital fights and bar brawls, take burglary reports and do his best to calm down an emotionally disturbed person who had misplaced their meds. As they sat sipping coffee, Pete and his partner had no way to know what the night ahead would hold. All they could count on was that it would be busy.

Twenty minutes into their shift, the dispatcher’s voice crackled over the radio. Someone called 911 to report a man had been stabbed. As it turned out, Pete and his partner were in front of the very building. Pete radioed back they were available to take the call. When the elevator door opened on the 17th floor, they were greeted by a trail of blood. It led directly to the apartment on the far end of the hall.

“It looked like someone had slaughtered a lamb,” Pete said. “We could have been in the coliseum in Rome right after someone had been torn apart by lions.”

Pete knocked and a woman opened the door. He remembers the apartment was spotless. There were lots of books around and he assumed the family must be educated. As soon as she saw the cops, the woman broke down sobbing.

She led the officers into the living room where they found a clean shaven and well groomed, light complexioned black male covered with blood. “He couldn’t have been more than twenty years old,” Pete said.

A quick glance indicated he’d been stabbed in the jugular vein. He was still alive, but barely. His mother told the cops her son had only said one word. “Chucky.” Chucky, it turned out, was her son’s friend. He lived on the 13th floor.

Pete called for backup and the two officers headed four floors down to the 13th. Sometimes only four cops patrolled this large, dangerous neighborhood at any give time. They knew they didn’t have the luxury of waiting. They were going to have to deal with Chucky.

“It was amazing,” Pete said. “The trail of blood went down the hall, down the stairwell and directly to an apartment on the 13th floor. To be honest I can’t remember whether we had our weapons out or not but I do remember we gave each other ‘the look.’ That’s the eye contact we use to gear ourselves up. The look that says, okay, here we go. We are going to deal with this.”

They knocked and a woman came to the door. She asked, “Can I help you?” Pete said she sounded more like a salesperson at the local super market than someone harboring a murderer. “We asked her if Chucky was home. She told us he was in the back bedroom getting dressed. She seemed as if she didn’t have a care in the world.”

Unlike the apartment on the 17th floor, this place was a vision from hell. “When the front door opened, an army of cockroaches ran out,” Pete remembered. “I’d seen some filthy places, but nothing like this. I swear it looked like the walls were shaking from all those cockroaches.”

The officers rushed to the bedroom and opened the door. It looked like a war zone. There was blood everywhere, including an oversized plastic container so full it was overflowing. It was everywhere except on Chucky. He was spotless.

The cops got him in cuffs and took him back to the precinct. When they received confirmation that the twenty year old man was dead, they booked Chucky for murder. When he was told to take off his clothes as part of the arrest process, officers found his body covered with blood. The thick globs had clotted into a dark purplish black crust.

Homicide detectives discovered later that the victim and Chucky were involved in a sexual encounter when things got out of hand. Both men were nude and the victim was handcuffed to the bed. Chucky was wearing his favorite gorilla mask and at some point his buddy got stabbed in the jugular. He claimed he couldn’t remember how it happened. He did admit when the blood starting gushing out like a broken water main, he tried to catch it in the plastic container. The handcuffs, it turned out, belonged to Chucky’s mother.

By the time the incident report was filed and Pete and his partner had finished with the detectives, eight hours had gone by. Their shift had ended hours ago. They both knew, with the adrenaline rush that’s always a companion after incidents like this one, it would not be easy to fall asleep once they got home.

Coming up next: Ann-Margaret was just two weeks out of the Academy and had just celebrated her twenty first birthday. She had two suspects she was pretty certain had set a man on fire. She had the man who was on fire and another man screaming that the suspects had just robbed him. On top of all that, she was in a subway tunnel. Her radio wasn’t working, she was alone and she had no way to call for backup.