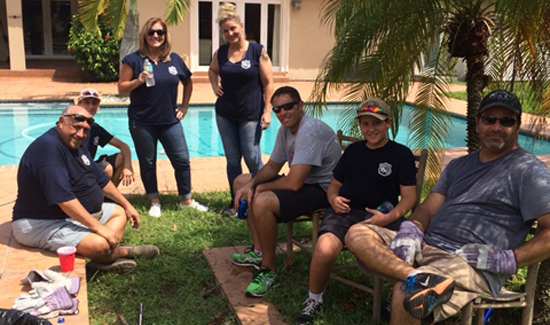 The clean-up from the devastation wrought by Hurricane Irma is underway. Millions of people are without power and may not be back online a week and maybe longer. Twenty-one thousand electrical repair people are on the ground. Six people died in a nursing home when the power went out. It will take months to assess the true damage caused by Irma, the most powerful hurricane in U.S. history.

John Rivera, the president of the Dade County PBA said the following: “Our heroes – our angels with badges, were more than ready to serve our community. Many had no power at home with enormous damage with trees ripped up by their roots, utility poles down and debris everywhere. But that had to wait – we serve the people first.”

Once the officers did everything they could to help the citizens, they turned their attention to the home of the mother of Detective Roger Castillo, who along with Amanda Haworth, was  shot and killed while serving a felony warrant on a man wanted for murder in 2011. The detectives, along with two other members of a regional task force, had gone to a home.

Upon making contact with an occupant of the home, someone inside immediately opened fire, striking Detectives Castillo and Detective Haworth. Another detective on the scene returned fire and killed the suspect. Mrs. Castillo’s home was totally buried in debris.

One Dade County PBA member, whose home was destroyed, returned home after a very long shift at 3 am and found that his fellow officers had taken chain saws and cleaned up most of the mess.

Officer Pablo Sanmiguel said, “Wow, thank you for everything you guys did at my house. You have no idea how much of a help that was. And it all happened so fast.”

If you would like to contribute to the fund to help officers and their families who’ve suffered extreme damage from the storm, you can send a check (made out to Love Fund (501)C3 to: