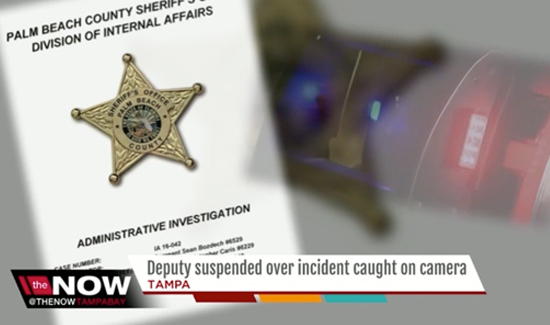 TAMPA, Fla – Two officers with the Tampa Police Department admit an off-duty Palm Beach County sheriff’s deputy and his wife would have been arrested if it wasn’t for their law enforcement background.

A Palm Beach County Sheriff’s Office Division of Internal Affairs released their administrative investigation into a deputy and his wife, also an employee of the office.

Sergeant Christopher Caris and his wife have been suspended after an investigation reveals the two were in violation of Palm Beach County Sheriff’s Office rules and regulations.

The report states the Tampa Police Department contacted the sheriff’s office in West Palm in December, after Caris was allegedly intoxicated and trespassed from the Tampa Marriott Hotel Waterside in downtown Tampa.

Police body cam video shows the entire encounter of police trying to escort Caris and his wife out of the hotel.

A Tampa police sergeant repeatedly told Caris that he had been drinking, “you are heavily intoxicated,” said the officer.

Throughout the entire video, Caris shouted profanities at the officers and told them he was in law enforcement in Palm Beach County and knows the law.

In an interview with internal investigators Sgt. Christopher Ugles with the Tampa Police Department was asked why Caris was not arrested he responded that the Marriott staff didn’t want them arrested, and just asked the Carises be issued a trespass warning.

Other officers on scene responded to the question different.

Police Officer James Wilcher was asked if Sgt. Caris wasn’t a Palm Beach County Sheriff’s Office employee or law enforcement officer would he have been arrested, “in a heartbeat,” he stated.

Another Tampa Police Officer, Joseph Ramos, said he did not think Caris and his wife violated state statute for disorderly conduct, but went on to say if Caris wasn’t a law enforcement officer he would have been arrested “100%.”

Ramos went on to say he was in shock at the behavior and lost respect for Caris and his wife.

Another Tampa police officer stated Caris and his wife were intoxicated and they “committed multiple crimes.”