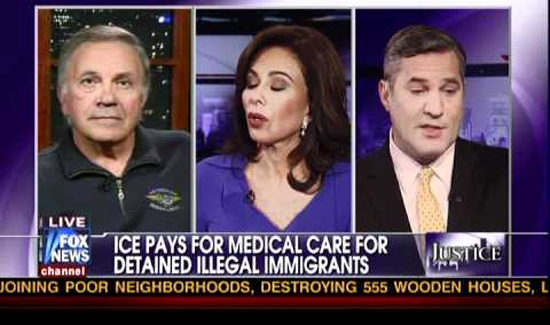 Local sheriffs traditionally have been among the strongest advocates for robust enforcement of federal immigration law, but the Obama years have left a legacy of nonenforcement masquerading as a “Priority Enforcement Program.”

Sheriffs in Denver, Houston, Austin and elsewhere have announced their vigorous opposition to cooperation with federal law enforcement. The problem is that Obama’s “enforcement priorities” for ICE allowed tens of thousands of criminal aliens who were eligible for deportation under laws passed by Congress to escape deportation.

The attitude of local sheriffs is important because the debate raging over “sanctuary” policies will not be decided in Washington, DC alone. Restoring effective enforcement of our nation’s immigration laws will require rebuilding a strong federal-state partnership, and that cannot happen if local sheriffs continue dragging their feet on lawful ICE detainers while singing from the ACLU songbook.

Some sheriffs are insisting a local sheriff or local jail should not be accused of following “sanctuary” policies merely because they will not honor ICE detainers. A county sheriff explains that “less is more” rationale in a recent newspaper interview, here.

However, I suspect most Americans see that attitude as a lot like a motorist insisting he is a very safe driver despite flunking the sobriety test with a 0.20 alcohol level.

The ICE detainer is a lawful, essential instrument of federal law enforcement and should be honored by all local sheriffs. Local jails that refuse to do so are releasing hundreds of criminal aliens back into the community—criminal aliens who are eligible for deportation under federal law.

In Colorado, the chief culprit and cheerleader for sanctuary policies is the Denver County jail. In 2014, Denver was listed in an ICE document as ranked number ten nationally in the number of ICE detainers rejected over an 8-month period.

Now, if ICE shows up at the sheriff’s jail at the precise time of a prisoner’s release and takes custody, the sheriff is supportive of that. Hooray. But if ICE requests the jail hold the criminal an extra 12 hours so ICE can pick him up, that request will not be honored. Why? Because the ACLU has won a couple of federal lawsuits at the district court level – for example, in a 9th Circuit case in Oregon — to establish the highly dubious principle that honoring the ICE detainer would be violating the alien’s 4th Amendment rights. The fact that no federal court in Colorado or the entire 10th Circuit has ever made such a ruling is evidently not as important to some county sheriffs as what the ACLU thinks.