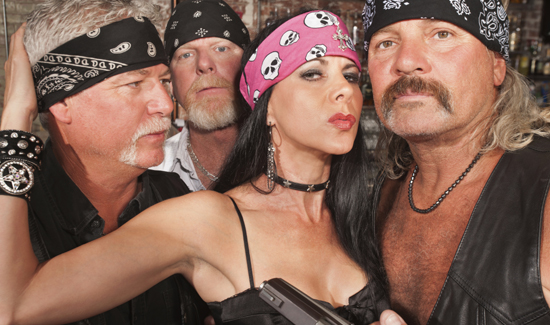 According to multiple media reports, police have issued an Officer Safety Alert after credible information was received that the biker gangs involved in the deadly shootout have been ordered to ‘kill anyone in uniform’.

Police were involved in the shooting that included at least three biker gangs.

One local police sergeant said the scene is “…one of the worst crime scenes I have seen in 34 years of law enforcement. ”

The biker gangs involved based on the colors and insignia are the Cossacks, Bandidos, and Scimitars, although the Cossacks and Bandido.

Apparently, the feud has been ongoing ever since a Bandido chapter president was arrested for stabbing two Cossacks in the parking lot of a restaurant.

The scene of the carnage this time is what’s known as a “breastraunt”—a restaurant where female servers wear next to nothing.

Police had tried to work with the establishment’s owners to prevent violence, but that didn’t pan out, due to a lack of cooperation.

“We are horrified by the criminal, violent acts that occurred outside of our Waco restaurant today. We share in the community’s trauma. Our priority is to provide a safe and enjoyable environment for our customers and employees, and we consider the police our partners in doing so. Our management team has had ongoing and positive communications with the police and we will continue to work with them as we all want to keep violent crime out of our businesses and community. We will continue to cooperate with the police as they investigate this terrible crime.”

For whatever reason, mass lawlessness and nine murders didn’t seem to be of much interest to the corporate media.

While an alleged threat against uniformed police in Baltimore received massive media attention and much discussion among law enforcement, the alleged threat from the biker gangs to shoot and kill “anyone in uniform” has not.

Be careful Officers.
This is a war as in the beginning of the movies,
Assault on Prct. 13/The Warriors.
Let’s be safe out there.
Let’s keep Blue clean