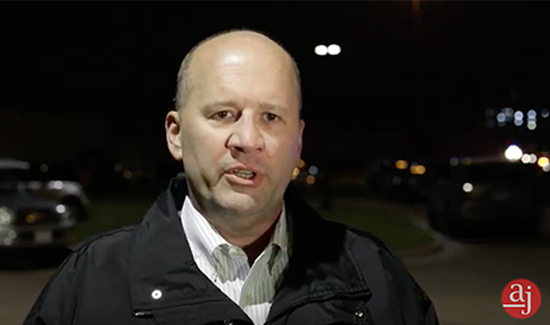 Via the Lubbock Avalanche-Journal:

Police have confirmed alleged shooter Hollis Daniels has been taken into custody after reportedly killing a Texas Tech Police officer during a shooting that left the university campus on lockdown on Monday night.

Officials have identified Daniels as a 19-year-old white male from Seguin, and a freshman at Texas Tech who lived on campus.

Officers were reportedly performing a wellness check on Daniels while on campus when, upon entering his room, officers reportedly found evidence of drugs along with drug paraphernalia, according to a statement by Texas Tech spokesman Chris Cook.

When Daniels was brought into the department for questioning, he reportedly pulled a gun and shot an officer in the head before fleeing on foot. It is unclear if Daniels had the weapon on him upon entering the campus police station.

A campus emergency notification was issued shortly before 8:30 p.m., following the reported shooting.

“At this time, the shooter is still at large,” the notification reported.

During the event, numerous law enforcement officials were staged near 19th Street and Boston Avenue, including the Lubbock Police Department SWAT Team.

The campus was on lockdown throughout the evening with students urged to take shelter in a safe location.

After 9:30 p.m., Whitley confirmed Daniels was taken into police custody.

“A Texas Tech Officer was able to tackle the suspect as he fled & took him into custody. LPD officers were close behind & assisted,” the statement read.

Asked about the location of Daniels’ arrest, Whitley said she could not comment on those details.

At the scene, Texas Tech Police Chief Kyle Bonath was visibly upset. Bonath restated previously given information and said more details will be available in the coming days. The name of the officer was not released as of Monday night.