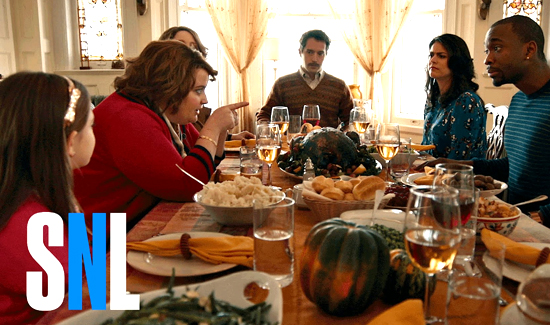 10. It’s going about as well as Thanksgiving usually goes.

9. It’s entirely unclear if the stain on your “good shirt” is gravy or blood from the fistfights.

8. Aunt May says the next time she hears someone say “you’re fired,” she’s grabbing the 12-guage and “letting the metal holler.”

7. The Trumpers are screaming “Build that Wall!” while they build a small wall of mashed potatoes separating the two sides of the dining room table. Oddly, because your girlfriend back home is Mexican-American, they say you have to pay for the potato wall—which you already did because you made the potatoes.

6. Kids at the kids table are sharing nudes of the First Lady on their phones. (Shortly thereafter, these spread to the adults table.)

4. You’re a cop. Your father’s a cop. Your brother’s a firefighter. Your new boyfriend works for the Huffington Post and wants to talk police reform during dinner.

3. Dad just announced that the “haters and losers” will be eating in the garage off of milk crates unless they agree to wear the hats.

2. “Well, I don’t know Uncle Jeff—you’re the racist moron that called by girlfriend “the help” because she’s Honduran, so maybe you’re the A-hole.”

1. Gunfire erupts between saying Grace and the soup.