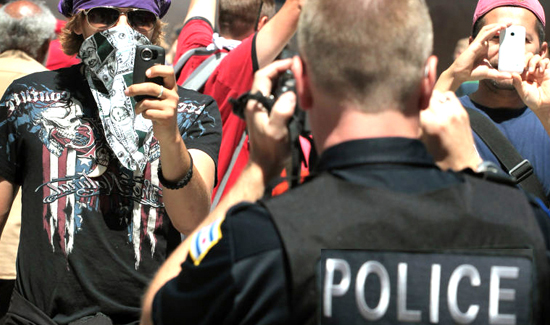 If you’re a deputy or officer no one has to tell you that it’s a fact that almost everyone has the capacity to record interactions with police.

It seems like not a day goes by without another “viral video” where citizens post the audio and video of the interaction. One of the more recent videos is out of Lafayette, Colorado.

The involved officer shared his side of the story with CBS4 after a cyclist posted a confrontation with Officer Sean Jenneiahn on Facebook.

One of the emerging challenges for law enforcement agencies is responding to actual or perceived controversies stemming from citizens recording police officers in the course of their duties.

Like most of the folks taping their interactions with cops, Marten’s intent was to make the officer look bad. From the verbal exchange it’s not hard to tell the cyclist was trying to escalate the situation by repeatedly challenging the officer. The exchange, as reported by CBS Denver is printed below:

Marten: You see the light guy? That means you can cross.

Jenneiahn: But you have to walk your bike.

Marten: I’ve never had to do that before.

While Marten and Jenneiahn were arguing another cyclist rode his bike through the crosswalk.

Marten: Watch this guy; he just did the same thing!

Marten: Are you (expletive) kidding me?

Marten: Are you having a bad day?

Marten: Are you taking it out on me?

Jenneiahn eventually handcuffed Marten when he refused to cooperate. Unfortunately for Officer Jenneiahn it turns out that there is no Lafayette law that requires people get off their bikes before crossing a street.

And that’s where the agency and the officer offered a master class in damage control.

“I regret not knowing the law to the fullest,” Jenneiahn told CBS4.

“We made a mistake. We think it’s the honorable thing to do to apologize to the individual,” Police Chief Rick Bashor said.

It was a simple mistake. The officer simply got confused state law and local ordinances confused.

Jenneiahn could not have had an easy time writing a letter apologizing to Marten. And he says Marten’s Facebook video does not tell the whole story.

“I was very polite. Most people have seen the video and know that he was trying to provoke me and I stayed very professional with him,” Jenneiahn said.

The officer’s and the agency’s response to negative publicity from a viral video could not have been handled better or with more professionalism.