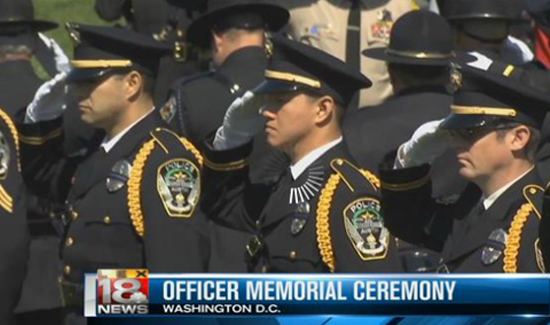 An estimated 4,000 people gathered on Capitol Hill on Sunday for a memorial ceremony, signifying the end to National Police Week.

“I was pretty humbled to sit here and see all the sacrifices that people have made across the country, including our own state, ” said Lt. Colonel Scott Miller of the Kentucky State Police.

During the ceremony, Hannah Ellis, cousin of officer Daniel Ellis, performed an original song she wrote from the perspective of his wife, Katie.

The names of the fallen were read aloud, and family members placed a flower for their loved one in a wreath.

“It was tough. As I got there, I had one of the gentlemen helping us up, he said just take deep breaths. It certainly gets teary eyed, ” said trooper Chrisman’s father, Randy.

Although the ceremony marked the end of National Police Week, families tell LEX18 they will continue to honor their fallen heroes when they get back to Kentucky.

“We’re very thankful, and we actually still have some events at home for the state police. The Kentucky law enforcement wall will have their event next week too so we have a few more events we get to honor our heroes so were looking forward to it, ” said Rebecca Tribby, wife of fallen trooper Blake Tribby.

The keynote speaker for the ceremony was Deputy Attorney General Sally Quillian Yates.