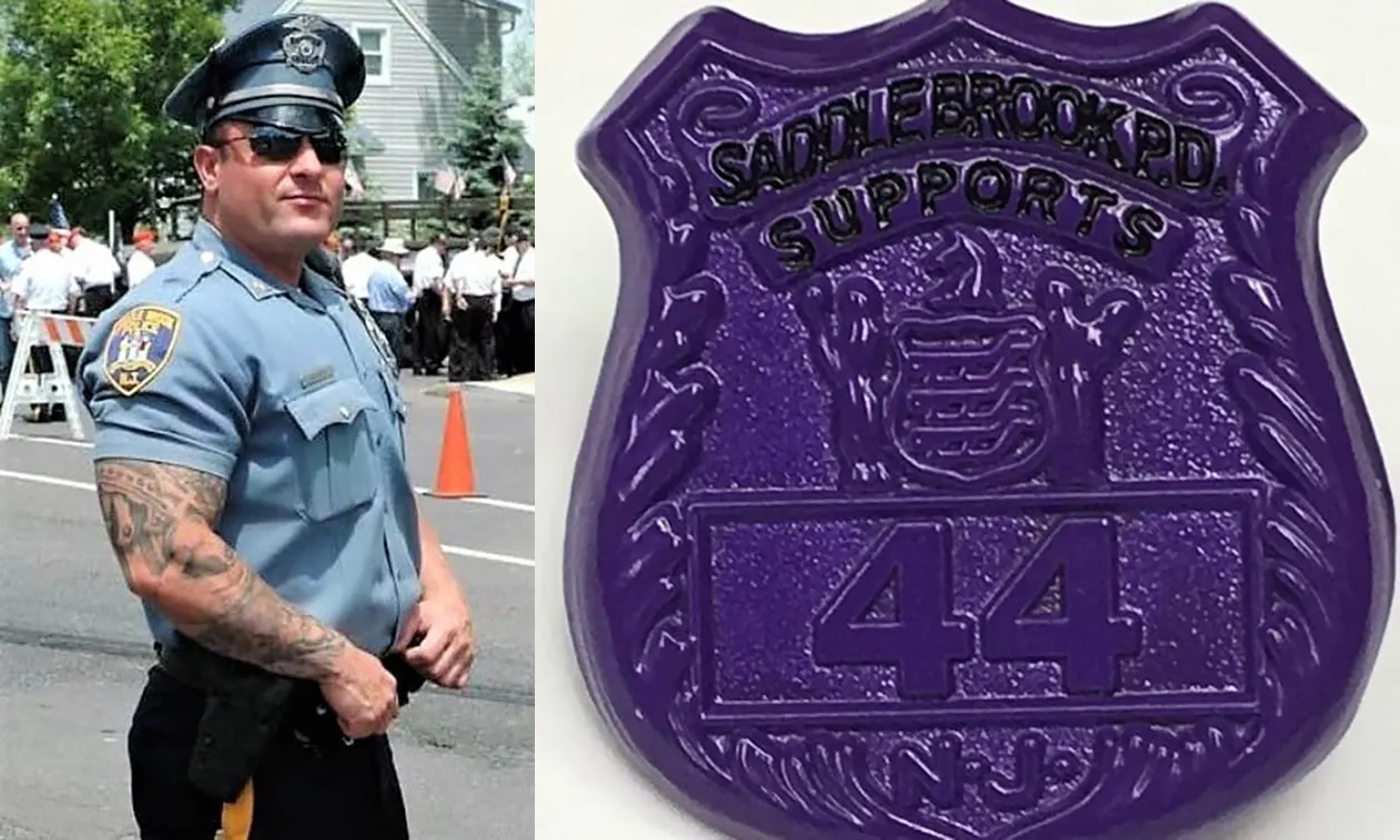 It is with deepest regret and sadness that our department announces the passing of Saddle Brook Police Officer Michael Juliano.

Mike, 47, passed in the early morning hours of Aug. 1 (Thursday) due to complications related to his battle with pancreatic cancer.

After it was detected in February, Mike was re-assigned from police patrol division and placed on modified assignment and duty hours to accommodate his medical treatments and procedures, which became necessary for his immediate future.

Mike was a fighter and wasn’t looking at his condition awaiting the Grim Reaper – but, rather, had the sense that “I’m going to deal with this and do whatever is necessary to survive for my children and family’s sake.”

Unfortunately, this disease fiercely and rapidly took its path, as it oftentimes does.

On it are the words “Saddle Brook Police Supports 44.”

The purple badge was mass-produced and made available for community-wide purchase with the intention to not only show unwavering support for Mike’s battle with the disease, but to set up a fund for his children, the youngest who is 16.

A special department order also was issued authorizing the pin to be a part of the officers’ uniforms. All members proudly wear the badge replica on their uniform shirt pocket. Members of the volunteer fire department and ambulance corps are wearing them on their uniforms, as well.

Just last week, members of the police department were coordinating and lining up vacation, personal and other accrued time of their own to donate to Mike during times when his treatments would make him unable to report.

His colleagues were always there and ready to give up of themselves and time to help our law enforcement brother.

Mike joined the Saddle Brook Police Department in August 2000. Prior to his appointment, he was a childcare supervisor with Youth Consultation Services in Paterson.

Mike is a 1990 graduate of St. Joseph’s Regional Catholic High School in Montvale and of New Jersey City University in 1998, earning a bachelor degree there in criminal justice.

Mike received many awards and commendations in his 19-year career with the Saddle Brook Police Department, including the 200 Club of Bergen County Life Saving Award in 2002, Saddle Brook American Legion Post 415 “Police Officer of the Year Award” in 2008 and a department commendation for his involvement in the apprehension of a bank robber in 2013.

In addition to many letters received from citizens acknowledging and praising his service, Mike always found the time to volunteer for causes to assist those most in need. He was an active and passionate volunteer in benevolent fundraising activities such as the NJ Special Olympics Law Enforcement Torch Run, Wounded Warriors Tank Pull and the Liberty International Airport Plane Pull.

He was also a member of the SBPD Honor Guard, always taking the time to attend police funerals and memorials and parades.

Mike leaves behind his three children, a granddaughter, his mother, brother and sister and other family members and friends.

Mike was a loyal and dedicated officer with a heart of gold. His selfless compassion to serve and assist others was his gift — and with those traits you know you have a great police officer.

He will be sorely missed.