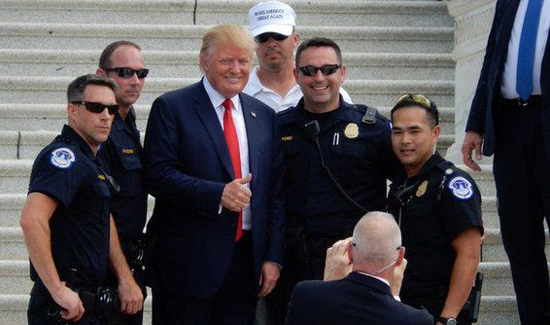 Say what you will about controversial Milwaukee County Sheriff and television personality David Clarke, there’s no question he was very valuable to President Trump on the campaign trail.

So, one would assume that if The Donald was going to invite a bunch of sheriffs from all over the country to the White House for a sit-down about immigration enforcement and other issues, Clarke would have a seat at the table.

But Clarke was noticeably absent from the list of sheriffs that will be attending a closed door meeting the President.

It’s hard to imagine a stronger Trump supporter than Sheriff Clarke, which makes his absence a source of some confusion.

But when you’re booking as many shows as Sheriff Clarke does, it’s entirely possible that he might have had a scheduling conflict that kept him from attending.

There is also the possibility that the controversial sheriff might be currently considered a little too controversial from the perspective of political handlers and public relations consultants.

“Milwaukee County Sheriff David Clarke, a prominent and controversial Trump supporter who had been discussed for a potential role in the administration, will not be in D.C. for the meeting, a spokeswoman told HuffPost.”