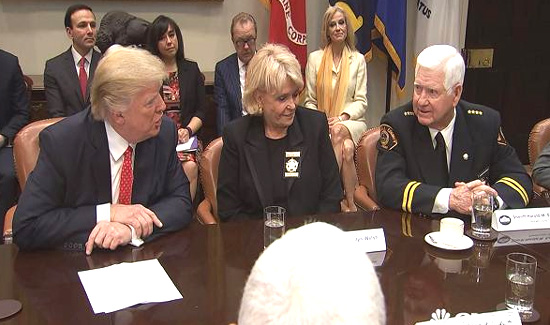 At a meeting on Tuesday with sheriffs from across the country, President Trump joked about destroying the career of an unnamed Texas state senator who supported curtailing a controversial police practice for seizing people’s property.

At the meeting, Trump asked the assembled sheriffs if anyone wanted to “make a statement as to how we can bring about law enforcement in a very good civil lovely way, but we have to stop crime, right?”

Sheriff Harold Eavenson of Rockwall County, Tex., brought up the issue of civil asset forfeiture, which allows authorities to seize cash and property from people suspected, but in some cases never convicted or even charged, with a crime.

Eavenson told Trump of a “state senator in Texas that was talking about legislation to require conviction before we could receive that forfeiture money.”

“Can you believe that?” Trump interjected.

“And,” Eavenson went on, “I told him that the cartel would build a monument to him in Mexico if he could get that legislation passed.”

“Who’s the state senator?” Trump asked. “Do you want to give his name? We’ll destroy his career,” he joked, to laughter from the law enforcement officials in the room.

Folks asking about Sheriff Clarke not being in attendance with the other Sheriffs when meeting with President Trump. I think some are over thinking it. And I may be wrong as well, but if President Trumps meeting was technically with the National Sheriff’s Association and the Major City Chiefs meaning those two organizations would have determined who the attendees were. So chances are it would have been the officers for those two groups. So there may not be some sort of sinister reason about Sheriff Clarke not being there.