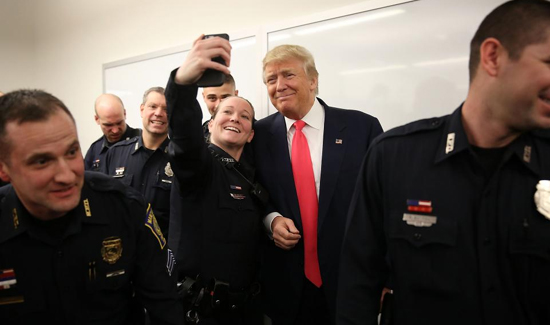 Via The Baltimore Sun:

President Donald J. Trump signed legislation Friday to prioritize the hiring of veterans as police officers, as well as a second measure to speed benefit claims for survivors of officers killed in the line of duty.

The signing, which took place in the Diplomatic Reception Room, was attended by several Maryland law enforcement officials, including from Anne Arundel and Prince George’s counties as well as Baltimore City.

“We are here today to reaffirm our unbreakable support for the American heroes who keep our streets, our homes and our citizens safe,” the president said. “And they’ve been doing an amazing job under very adverse conditions.”

One of the measures allows a popular Department of Justice grant program — used to expand the size of local police forces — to hire and train veterans. The other measure would streamline the process by which families of officers killed or permanently disabled in the line of duty can receive financial support.

As of last April, nearly 6 in 10 applications had been pending for more than a year, according to the White House. The legislation would allow families to apply online and would let the Department of Justice give additional weight to determinations of disability made by state, local and other agencies.

“For too long injured officers have suffered and the children of fallen officers have put their dreams of college on hold while bureaucracy delayed crucial benefits, made it impossible for their families,” Trump said at the signing. “No longer. It’s unacceptable and it’s going to end today.”

Trump repeatedly raised what he viewed as the plight of police officers during his presidential campaign last year. Both bills received unanimous support in Congress, and had the backing of groups such as the national Fraternal Order of Police.

“This is very important to law enforcement and the wider public safety community because it provides our members peace of mind knowing that their families will be taken care of in the event they are killed or disabled in the line of duty,” national FOP president Chuck Canterbury said in a statement.