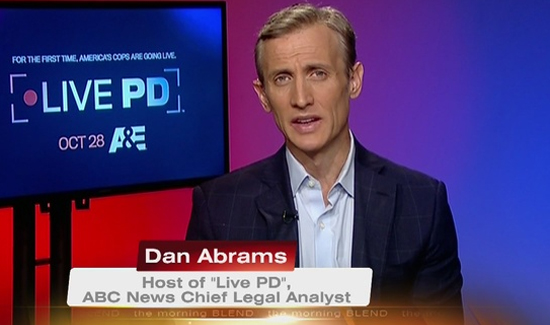 The Tulsa Police Department’s time in the spotlight has come to an end.

Tulsa Mayor GT Bynum confirmed on his Facebook page that the department decided to not continue with “Live PD” after its contract ended.

“Live PD” airs on A&E Friday nights. Cameramen and producers follow police departments around the country and capture officers in real-time while on the job. Tulsa Police Department has been one of those departments.

The program appeared to be popular with Tulsans as comments on the mayor’s Facebook page suggest the city’s decision to cancel was unpopular. Some of those posts included:

— I do not think you should have cancelled the LIVE PD, that should not have been your decision to make. You were wrong to censor / cancel this show from others to watch, If someone did not want to watch the show they could have easily turned the channel, if this how you are going to handle things I wish I had not of voted for you, I am sure others and I will keep this in mind when you are up for re election, they were just showing what happens here, whats wrong “YOU CANT HANDLE THE TRUTH”!

— No more Live PD in Tulsa?? Shame on you mayor. You SHOULD be proud of OUR Tulsa Police Department. They are an upstanding example of the protection and law enforcement needed in a lawless society. Maybe you are embarrassed that Tulsa is becoming more dangerous by the day. Pretend it isn’t, maybe it will all go away…

Mayor Bynum has responded to many of the posts, and points out that he did not make the decision but that he stands behind Police Chief Chuck Jordan.

“No one “cancelled” Live PD. The contract ended and our Police Department leadership determined they did not want to renew it. As the people responsible for protecting our community, I support their decision,” Mayor Bynum wrote in response to one of the commenters.

One commenter wanted to know what citizens can do to help the city.

Tony Demas wrote, Mayor Bynum, I just saw that you and Police Chief Jordan decided to cancel Tulsa’s participation in the show Live PD. The reasoning, as I understand it, was because people were afraid to be caught on TV. Is that legit or is there more behind it. I think the program captures some of the major gang problems we have in this wonderful city. It seems as if those might be the main elements complaining because they are finally being brought to light. While reality TV might not be the best avenue to showcase these concerns, what other ways are you and the City approaching to raise public awareness and remove these element from our communities? How can we, as citizens help? #proudtulsan #communityawareness.