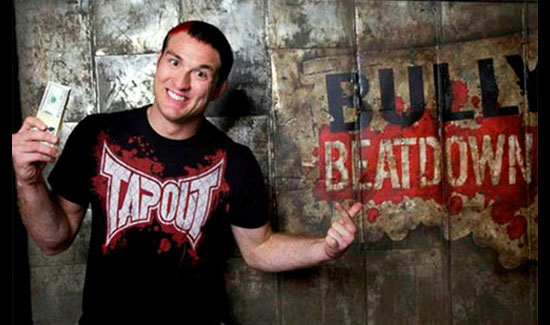 Social media is great for all kinds of things. You can inform hundreds of people that the sandwich you just ate was delicious. Or you could live-tweet a standoff with the police.

Standoffs between suspects and police are increasingly common but this is the first such incident where the suspect actually tweeted about the standoff in real time. The guy even encouraged people to come to his house to watch “the absolute waste of resources going on outside of my house right now.”

And some people said, “Hey…why not?”

Mike Tierney was one of the rubber-neckers that took Miller up on his offer.

“It’s just something to do. I’m off today and I live two miles from here.”

Why plunk down $15 bucks to see a crappy action-movie when you can see the real deal, right?

The standoff started when Orange County sheriff’s deputies tried to take Miller into custody on
an arrest warrant in a domestic violence and stalking case.

But he managed to break free and flee back inside the residence according to Orange County Sheriff’s Lt. Jeff Hallock.

A few hours later SWAT officers placed a device on his door that blew off the locks. At that point Miller surrendered.

Miller defended himself in a tweet, saying “I have not committed any crime, but yet i am forced HERE.”

That makes little sense but MMA fighters are rarely known for their communication skills.

Some twitter users tried to help by encouraging the suspect to give himself up.

Twitter user @pjuric tweeted “If not to save himself, please think of your neighbors and our kids!”

The guy probably meant “yourself” but at least his heart was in the right place.

Some of Miller’s tweets are below:

“I WISH YOU NO HARM. I respect the Police, but this is overkill, for something that would be settled with one piece of paperwork from OCBAIL;”

“ALL THIS because I wanted to help raise a young boy into a man, and his mama wenr off her meds, and an ambitious DA thinks mayhem is BAD.”

“i woke up late, and couldn’t leave because there is a highly equipment regiment of wanna be soldiers outside my house reminding me that, ‘WE WON’T GO AWAY!’”

Mental illness, outstanding warrants and so-called social media is a bad combination- even if it is pretty entertaining.