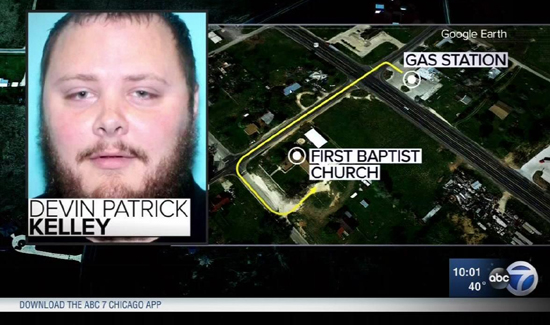 WASHINGTON (Reuters) – The U.S. Army’s chief of staff said on Wednesday there were “significant” gaps in reporting soldiers’ criminal activities to law enforcement, an omission the Air Force acknowledged in the case of a Texas gunmen who killed 26 people.

The issue of the military passing information on service members’ criminal activity to law enforcement agencies was highlighted earlier this month when the Air Force said it had failed to provide data about a Texas shooter’s criminal history to a U.S. law enforcement database.

Former Airman Devin Kelley, who killed 26 people and wounded 20 others when he opened fire in the First Baptist Church in Sutherland Springs, Texas, on Nov. 5 was convicted five years ago by a general court-martial on two charges of domestic assault against his wife and stepson.

The Air Force said that information was not entered into the National Criminal Information Center database, which the Federal Bureau of Investigation oversees and uses to run required background check requests from gun dealers before a sale.

“We all know that situation inside the Air Force, that could have been any one of the services, not just the Air Force,” the chief of staff of the U.S. Army, General Mark Milley, told reporters.

“We have a significant amount of omissions that it concerns the secretary and I, and it clearly tells us that we need to tighten up as well,” Milley said.

Milley said that probably about 10 to 20 percent of all cases had not been reported to law enforcement agencies such as the FBI. He added that the Army had already reported some service members’ criminal activity since it had found those gaps.