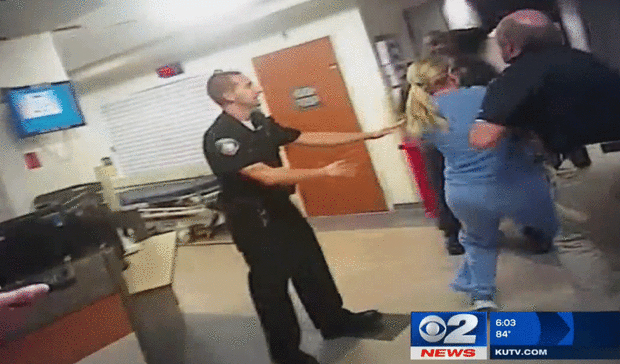 A Utah police officer was fired Tuesday after being seen on video roughly handcuffing a nurse because she refused to allow a blood draw in an incident that became a flashpoint in the national conversation about use of force.

Brown said in a disciplinary letter that he was “deeply troubled” by Payne’s conduct, which he described as “inappropriate, unreasonable, unwarranted, discourteous, disrespectful” and said brought “significant disrepute” on the department.

“You demonstrated extremely poor professional judgment (especially for an officer with 27 years of experience), which calls into question your ability to effectively serve the public and the department,” Brown wrote.

Attorney Greg Skordas, who represents Payne, has said his client served the department well for nearly three decades and questioned whether his behavior warranted termination. Skordas couldn’t immediately be reached for comment Tuesday.

Tracy made an impulsive decision in ordering Payne to arrest Wubbels without first taking time to understand the facts of the situation and the law, Brown wrote in his disciplinary letter.

He said the order created chaos and unnecessarily escalated the situation.

“Your lack of judgment and leadership in this matter is unacceptable, and as a result, I no longer believe that you can retain a leadership position in the department,” Brown said.

The letter said Wubbels told investigators that Tracy minimized her concerns, intimidated and lectured her, and made her feel like she was to blame for the events.

The Associated Press obtained the disciplinary letters for Payne and Tracy through a public records request.

Politics. Wow
Even in this small dept. Of what 450. It shows. The law and request of a official can and will be ignored. Even after his was ordered. Chief Brown. Needs to leave.

Good riddance and every officer that was directly involved should have been punished. The law was clear and the officer arrested the nurse for “contempt of COP”. She failed to follow unlawful orders and was arrested on a trumped charges. Finally a bit of justice for the public.