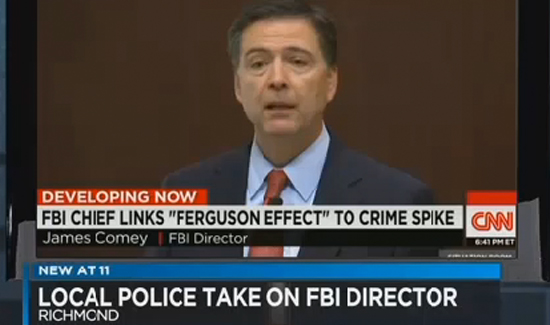 Are recent viral videos of police altercations—like that controversial clip of a South Carolina high school student being slammed to the ground by the school’s resource officer—leading to a spike in crime? The director of the FBI director seems to think so, but local officers are saying not so fast.

“Who describe being surrounded by young people with mobile phones held high taunting them when they get out of their cars,” recalled Comey. “They said to me ‘We feel under siege and we don’t feel much like getting out of cars.'”

Comey notes crime is on the rise, and he suggests it coincides with a “chill wind” blowing through law enforcement over the last year.

“And that wind is surely changing behavior,” said Comey.

Kevin Carroll, who is president of the state Fraternal Order Of Police, disagrees.

“When someone says we are afraid to go do our job, they are accusing us of being cowards,” said Carroll. “If a guy is in a school killing children, you don’t stand outside and say ‘I’ll wait until he’s done.’ You go in after him.”

“You don’t have the luxury of not doing your job,” said Carroll. “You have to do it every day, because if you don’t do it, you put yourself in harms way and anybody else you work with.”

Carroll says, despite the violence, officers are certainly not retreating.

“If he has statistical data to show that, he needs to share it,” said Carroll. “I’ve not witnessed that.”

Recent reports show Comey conceding he has “little evidence.” The FBI director instead reportedly calls it ‘common sense’ that police scrutiny has caused crime to spike.

“There’s an increase in crime, but there’s a lot of things that can be in correlation to that,” said Carroll. “I wouldn’t say pointing the finger at the police and saying you are not doing your job is the solution.”