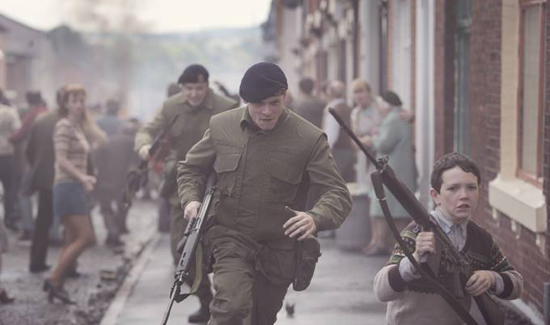 Been to the cineplex lately? There’s a good reason to go—and, no, we’re not talking about “Fifty Shades of Grey.”

We caught a screening of “71” this past weekend and were blown away. Starring Jack O’Connell—you might recognize him from Angelina Jolie’s WWII film “Unbroken”—”71” tells the story of a British soldier seeking  sanctuary after being mistakenly left behind by his unit in Belfast during the 1971 riots.

It’s a gripping, intelligent action-packed story that you’ll definitely want to see on the big screen. “I mean run literally. The movie is set against the sectarian violence in Belfast, Northern Ireland, in a year that opened with the tarring and feathering of several men by the Irish Republican Army. By February, a British soldier was dead as were a number of civilians, and several riots had convulsed Belfast. It’s against this backdrop that Mr. O’Connell’s character, Gary Hook, arrives with a regiment of similarly inexperienced soldiers. Smoke pours from burning cars, some strategically bookending streets like barricades. During the day, children play among scattered bricks that they sometimes hurl at the soldiers (when they’re not lobbing bags of feces instead). At night, the maze-like streets belong to the war and the running people, British and Irish, stoking the flames.”