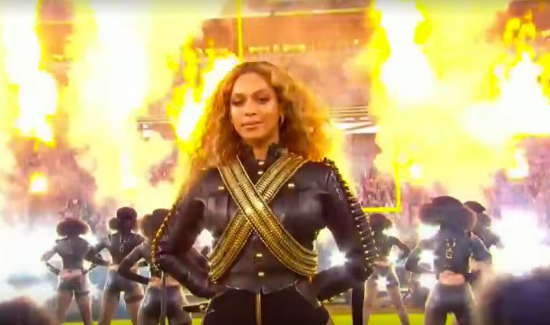 Celebrities, by the very nature of the attention they attract, have built-in bully pulpits. They most often use them to shed light on honorable causes encompassing everything from disease and world hunger to animal rights and anti-bullying campaigns.

At times, however, their activism is misguided. A case in point is singer Beyoncé Knowles’ controversial routine during Sunday’s Super Bowl halftime show as detailed by CBS News.

Specifically, Ms. Knowles paid tribute to the violent Black Panther Party and Mario Woods, a man recently released from state prison, on parole for armed robbery, who used a knife to slash a random innocent person. As detailed in a piece by George Hofstetter, President of the Association for Los Angeles Deputy Sheriffs, the heavily bleeding victim called the police, who tracked Mr. Woods to a nearby street, where he refused to drop the knife, proclaiming to officers “You better squeeze that ****and kill me.” Only when Woods began walking, knife in hand, toward a crowd of bystanders did officers fire their weapons. Additionally, several of Beyoncé’s dancers were pictured on Twitter holding signs that read, “Justice 4 Mario Woods.”

The ADDA fully supports political speech and public activism, we practice it ourselves weekly with our well-read blog. However, if Beyoncé wants to move beyond the cheap and tawdry publicity hit, there is plenty of real ground to be covered.

Police officers are tasked with protecting residents and police shootings understandably attract intense attention. But when you look at the greatest threat to young black people, it isn’t the police. It’s black-on-black violence. Every weekend in Los Angeles, Oakland, Chicago and Baltimore young black men are killing other young black men. The ADDA knows this because our membership works closely with the victims’ families every single day as we prosecute those responsible.

How much would society benefit if celebrity activists such as Ms. Knowles used their bully pulpits to decry the violence that has been tragically routine for way too long in some communities? To protest the shootings where a toddler dies from an errant bullet, a teen is killed while being robbed of his shoes, or a young woman takes a bullet while diving on top of neighborhood children to protect them during a drive-by shooting?