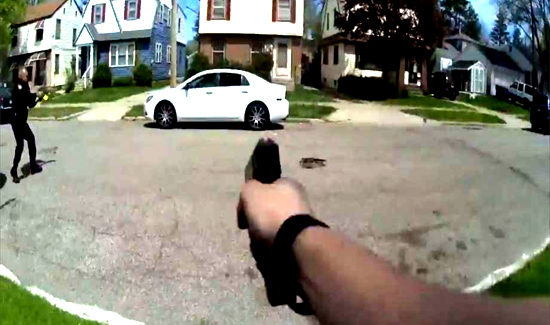 The Kent County, Michigan, prosecutor says Grand Rapids officers were justified in fatal shooting of 18-year-old man during a gun battle earlier this month. Prosecutor Chris Becker released his decision Tuesday, along with dash camera and body camera video showing the May 3 shooting of Malik Carey.

Prosecutors say Carey gave a fake name, so officers waited to get a picture of him to confirm he was the person they were looking for. In the meantime, Carey and one of the officers chatted nonchalantly about Carey’s dreadlocks.

But once officers confirmed Carey’s identity, things turned violent. Prosecutors highlighted portions of the video that show Carey pulling a gun from his waistband. The officers scrambled back, one of them shouting, “gun, gun, gun, gun.” Shots rang out. Police say Carey got off four shots before officers returned fire.

It sounded in the video as though a total of about 15 shots were exchanged. Carey died at the hospital. No police officers were shot. The police chief and the prosecutor said officers acted appropriately given the circumstances. In fact, Becker said that had Carey survived, he would have been charged with attempted murder. “They had no other option,” Grand Rapids Police Chief David Rahinsky said, speaking to reporters after the video was released. “It just goes, in my mind, to reinforce just how dangerous a profession that law enforcement is.”

Great footage for training and learning.