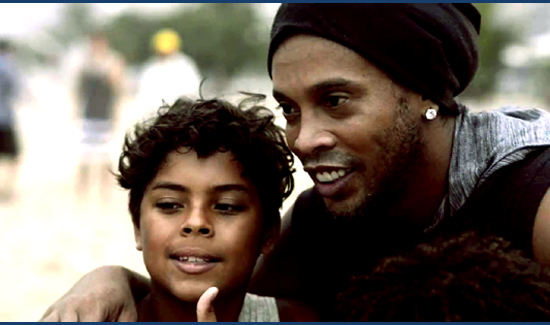 In the old days, before digital ads, big data, meta- and beta-tagging and all the rest, there was a lot of artistry to be found in commercials.

It might have been a catchy slogan or tagline. If you’re of a certain age, you know references like “Where’s the beef?” and “Mikey likes it!”

And then there were the sports ads, some of which actually qualify as solid short films.

If you’re a futbol fan (as opposed to football) fan you might remember Ronaldinho, also known as “Gaucho.”

The Brazilian buck-toothed wizard was a magician with the ball at his feet. He could do anything, and frequently did, spraying perfect no-look passes to teammates running at full speed, or scoring goals so beautiful, they may never be forgotten.

But there was also something magical about the way people responded to Gaucho. He has that thing—that indefinable quality that just draws folks to certain people.

Anyway, XXL Sports recently made an ad featuring the Brazilian legend (and some Brazilian police officers), and it’s amazing.

So, screw all the nonsense that’s got everyone so worked up and check out the video.