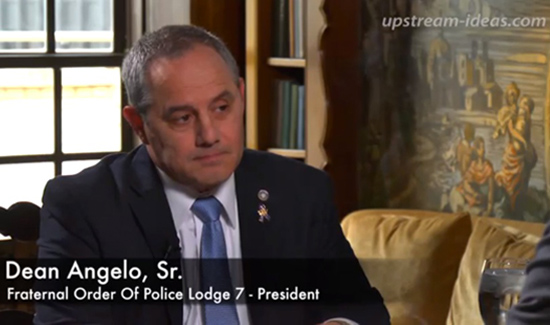 Check out this explosive, wide-ranging discussion of police, street violence and politics with Chicago FOP President Dean Angelo, Sr., that aired on a recent edition of “Against The Current.”

Angelo tells host Dan Proft that the claim of systemic racism within Chicago Police Dept. as presented in the report issued by Mayor Rahm Emanuel’s task force is “ridiculous.”

The FOP president predicts Chicago will “light up this summer” because, in part, of a level of disrespect being shown to Chicago police he hasn’t seen in his 36-year career in law enforcement.

Angelo adds that the result of non-law-enforcement folks telling police how to do their jobs is that “more people will die.”

This guy is a clown, simple as that. He has no basis in fact for any of his claims. Anyone with half a brain knows there are deep an persistent problems within the CPD. The problems range from civil rights abuses, persistent racism, officers that routinely lie in reports and on the stands, Homan Square and others. If the CPD feels disrespected by the public, its because the CPD did the things that caused the public to lose that trust and respect. Clean up your house and earn the respect you ask for.

I think it’s plain to see who the clown is .

Amen to that. Dad always said, “An empty wagon makes the most noise.” Leonard certainly gives credence to that long-standing statement.

It’s interesting that neither Jim or Lefty disputed any of the things I have stated. Do you deny that Homan Square was used as a place to hide citizens during the bookings process. Do you deny that the City of Chicago had to created a reparations fund because Officer Jon Burge and his crew systematically tortured suspects? Do you deny that the IPRA was basically a rubber stamp for the police departments and routinely failed to investigate misconduct or that Alvarez routinely failed to hold officers for lying on the stand? These are just a few examples. I’ll wait for a reasoned response.

I won’t waste my time. When reading your nonsense, I’m reminded of a statement made by a man much older and wiser than me: “If I wanted to listen to an a**hole, I’d fart.” Anything further to say, spout off somewhere else, pal.