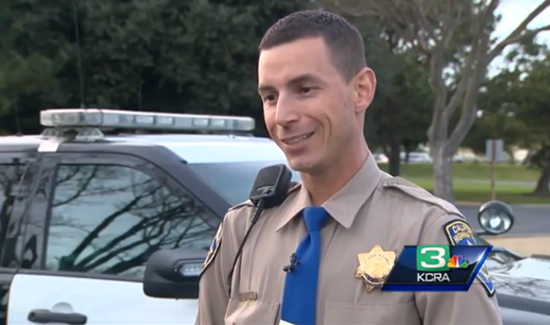 California Highway Patrol Officer Todd Dehaan lives in Folsom, but works in Hayward—and during his commute to the Bay Area on Wednesday afternoon, he spotted something on Interstate 5 while off duty.

KCRA.com reports that a man suffered some type of medical emergency while driving a truck down Interstate 5 near Twin Cities Road on Wednesday evening, resulting in the vehicle and an RV landing in a slough under the highway.

“I noticed a bunch of cars slowing down real quick,” 32-year-old Dehaan said. “I had the feeling that something was wrong.”

A man in his late 60s had heart problems and veered off the highway, according to the CHP, and his truck and trailer nosedived into the slough.

“So, I went down and stripped to my sweats and white T-shirt,” Dehaan said. “I took out my shoes and jumped in the water because I didn’t want to lose him.”

The driver was still conscious.

“It seemed like he was pretty happy to see me,” Dehaan said. “He was a bit out of it because he knocked his head pretty hard.”

The officer tried to help the driver escape through the window, but discovered his ribs were broken from the impact.

Dehaan found the man’s heart medication and kept him calm in the water until firefighters arrived.