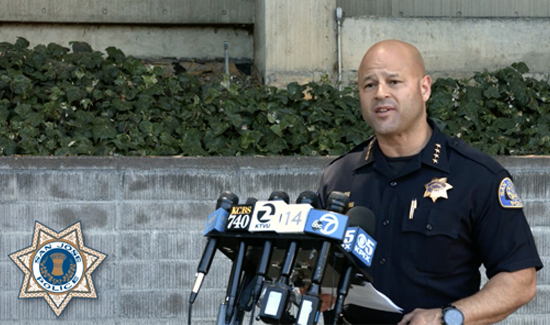 “Our officers should be commended. The violence that occurred last night will not go unchecked. San Jose officers did the job of making the arrests, clearing the streets, and protecting the safety of the public.”

Those are the words of Chief Eddie Garcia of the San Jose Police Department, who held a press conference yesterday to explain what really went down during a rally for Republican presidential candidate Donald Trump.

Watch the video. The media had it wrong.

As you all probably already know, due to the national coverage, the protesters in San Jose California due to Donald Trump’s visit became very violent two days ago. On a national level, I have been receiving emails from citizens and other officers from agencies across the country. It is believed that the media started the rumor that we were ordered to “standdown.” Nothing is further from the truth.

We are now struggling with correcting the rumors, keeping the morale of the officers up, and most importantly keeping them safe from some in the community and outside the community who are under the misconception that we allowed violence to occur. I thought I would share a internal email blast and coverage from our chief due to the events unfolding and the media circus is took just hours to develop.

Here is the message I sent to our members:

Like most of you, I went off shift late last night dead tired from a very long and difficult day due to yesterday’s protest and jumped in bed. Once again this department rose to the occasion and did an outstanding job despite not having the resources every other major city in America have.

I woke up to the news, both local and national that incorrectly reported that our Police Department stood down and allowed vicious assaults to happen. The ridiculous notion that we allowed this violence is offensive. We do not have the luxury of thick skirmish lines and robust arrest teams like other agencies.

I proudly stood with many of you on that line keeping everybody as safe as we could and allowing those that practiced non-violent free-speech to exercise their rights. Throughout this violent protest, I saw officers rescuing victims, keeping others safe and arresting the violent cowards who needed to be arrested. Unfortunately, some in the media don’t want to tell that story.

Our department’s unprecedented change in hours, call backs and holdovers for this event has been a top priority of your POA board the past few days after first learning this event was coming to San Jose. Your POA executive team is addressing these along with officer safety and logistical issues with command staff. We are not only concerned about the day of the protest but also on whether or not we had the proper equipment and sufficient officers to keep ourselves and the public safe.

The people in this department continue to impress me every day. We were attacked, cowards said they wanted to kill us, to hurt us and we responded with restraint and professionalism. Well done. Your entire board of directors stands by all of you and I was proud to stand in that line with all of you yesterday and would gladly face that challenge with each and every one of you if need be.

We will send an update soon of the POA’s efforts today defending your good work and combating the false narratives in the media.

Well said. God love law enforcement and the San Jose Police Department with the job they have to do in present day environment.

Great job San Jose Police Department and thank you Chief for backing your officers and fighting back against the media.