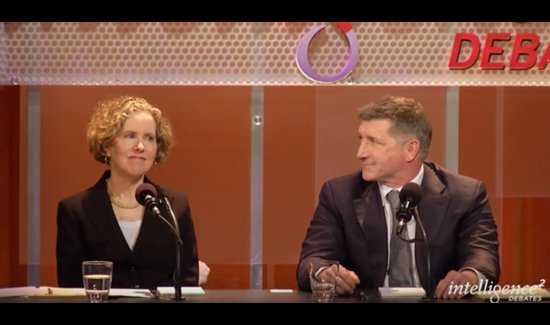 This week Rains Lucia Stern Attorney Harry Stern and distinguished author Heather Mac Donald teamed up on Intelligence Squared U.S. Debates, the world’s premier forum for debate and intellectual discussion, to argue against the motion that policing in America is racially biased.

Intelligence Squared U.S. is a non-profit debate series broadcasted across the country via public radio and podcasts and regularly features prominent experts on various subjects. Debates are in the Oxford format featuring a sharply framed motion proposed by one side and opposed by another. Experts are placed in teams, “For The Motion” side or “Against The Motion.”

The winner is determined by audience vote that occurs twice: once before the debate and again at the end. The team that sways the most audience members to their side between the two votes is declared the victor.

Wednesday evening’s asserted that policing in America is racially biased, a controversial issue igniting much of the country today. Both teams debated passionately — arousing cheers, boos, and laughter from a visibly engaged audience.

At the end of the night, the moderator announced that Harry Stern and Heather Mac Donald were voted as the winner by both audiences. Their defense that policing in America is data-driven, and therefore unbiased, succeeded in swaying the most voters against the motion.

The debate podcast and video can also be accessed through the IQ2US app, downloadable on Apple and Android mobile devices—search for IQ2US in the iTunes store or on Google Play. Last night’s debate streamed live on Facebook, YouTube, and iq2us.org to thousands of viewers. Next week, its video on-demand release of this debate will be available on its website, and on AppleTV and Roku streaming devices.