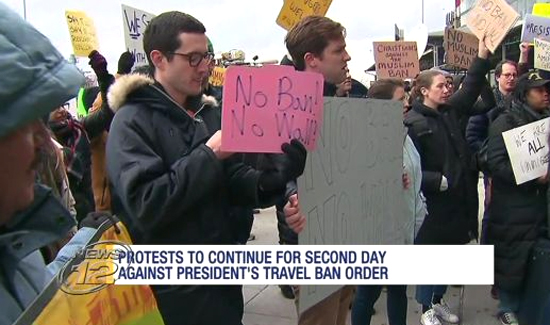 But the obstruction went event further. Customs officials refused to speak with several members of Congress who arrived at Dulles to demand that CBP comply with the court order.

Airport police officers cordoned off the area where CBP was questioning detained travelers and were preventing anybody from entering. Washington-area Democratic Reps. Gerry Connolly (Va.), Don Beyer (Va.) and Jamie Raskin (Md.) demanded that airport police officers allow them to at least speak to customs officials, but the cops claimed they could do so only if CBP allowed them to.

“I am Gerald Connolly, I’m a member of Congress, I represent right up to this airport and we’re asking for access to the people you’re detaining,” Connolly said.

“And what I’m telling you now is I have a major going back to discuss this with CBP. We’re gonna ask them if you can come back,” said John Damskey, deputy chief of police for the Metropolitan Washington Airports Authority. “If they say yes, absolutely fine, I’ll take you back there myself. If they say no, we’re gonna ask them to come out and talk to you. It’s up to them.”

Connolly argued that even as an airport police officer, Damskey was legally bound to allow them to speak to CBP to ensure the authorities’ compliance with the court order.

“Your job is to enforce the law,” Connolly said, his voice rising with irritation. “We have a federal judge who has ruled that anybody being detained is entitled to legal representation. Have they been denied that right or are they in fact getting legal representation?”

“What do you see your responsibility as in terms of enforcing a legitimate federal court order?” Connolly persisted.

The police were being reasonable. Politicians grandstanding.