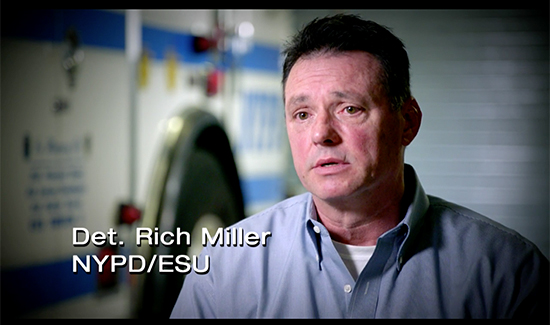 At the PBR World Finals in Las Vegas on Nov. 4, this stirring video demonstrating why the sport always stands for the American Flag was shown in T-Mobile Arena. In it, NYPD Detective Rich Miller relays the behind-the-scenes story of how the first flag got raised amidst the rubble of the downed World Trade Center buildings. You can read more about Miller and his life-changing experience as a first responder at Ground Zero in Cynthia Brown’s book, Brave Hearts.

LAS VEGAS – For its “Celebrate America” finale at World Finals, the Professional Bull Riders (PBR) wanted to do something extra special in honoring true heroes and uniting fans.

The plan was to recognize the family of fallen Border Patrol agent Robert W. Rosas, sure to be another emotional tribute carried out every Saturday night of this year’s elite tour.

But the league wanted to put a true exclamation point on this season’s somber yet uplifting collection of tributes and stirring presentations of our nation’s colors.

On Saturday night, the penultimate night of World Finals opened up with this video showcasing families of fallen soldiers and first responders. The video, set to the song “Never Forgotten” by combat vet Ryan Weaver who lost his own brother in Iraq, concludes “They are why we stand.”

And then, fans at T Mobile Arena, not far from a site of unspeakable hatred meant to divide just a month ago, came together to sing the National Anthem a cappella.

At a time when the first and primary credo of a major professional sport is “do not offend,” the PBR is quite comfortable in wrapping itself in the patriotic sensibilities shared by its fan base.

The sport is laying out an emotional case for why the stars and bars should be respected – not that any ticket holder or TV viewers requires a boot in the butt to do so.

And then those same fans sang “The Star Spangled Banner,” led by the PBR’s official entertainer, Flint Rasmussen.

You can bet they knew every word.

Right in Las Vegas. Down the road from a kill zone. Home of the brave, indeed.

None of this is surprising from the only pro sport whose athletes voluntarily pledged to stand for the national anthem more than a year ago.

But this was not a finger-in-the-wind marketing stunt playing to socio-political changes. Love of God and Country is in the PBR’s DNA, no matter who is in office or what’s popular at the box office.

Weaver, who co-wrote “Never Forgotten” with Matt Billingslea and Jackson Epply, quit flying Blackhawk helicopters the very day his brother died. He began chasing a country music dream by singing in Karaoke bars. At a veterans’ benefit in Colorado, PBR discovered a jacked up veteran singing his lungs out and telling his poignant story.

Since then, Weaver has been anointed “the patriotic voice of the PBR.” His 4-song EP, “Celebrate America” is available at World Finals with proceeds going to The Border Patrol Foundation.

The “Never Forgotten” video shows families of first responders and military members who have died in service to our communities and country.

And here’s where the story takes a remarkable turn.

In the course of developing the narrative revealing a flag to be revered, PBR came across historic footage that had never before been distributed to media.

Weaver had heard about Miller raising the first flag at the site of the attacks, and made a connection to “Never Forgotten.”

“The PBR is planning a video for World Finals remembering the fallen and honoring our flag,” the combat vet told his friend. “Maybe they’ll want to hear your story?”

Most people are familiar with a dramatic photo of a flag unfurled on the site of the attack by FDNY, captured by a Bergen Record photographer, and published around the world.

That amazing Pulitzer Prize-winning photo was shot in an area open to photographers.

The next day, in a highly restricted area off-limits for media, Miller emerged from searching the rubble of a sub-basement between collapsed Buildings 1 and 2, a hellish place referred to as “the crater.”

Sticking straight up was the antenna that a day ago had been beaming local broadcasts from atop the North Tower, more than 1,000 feet above. Miller knew he had to put a flag on the metal structure.

A few blocks away, he “borrowed” a flag from a local high school gymnasium. Back where the Twin Towers had once stood, two firemen set up a ladder.

A breeze kicked up, and the flag unfurled itself. An official cry of “present arms” from a FDNY Battalion Chief echoed over the pile.

A New York City cop was getting all this on a grainy video that appears to show the ceremonial settlement of a post-apocalyptic moonscape.

For years, Det. Miller declined the opportunity to discuss the flag raising. That horrific day, and all the loss and pain it brought, was a wound still raw.

“Anytime Rich was approached with questions about who put the flag up first, he would respond, ‘The firemen lost 343 men that day. I don’t care who put it up first, second or third,” Theresa Miller, his wife, said.

Kelley contacted the detective with PBR’s intentions. It took Miller a night to think about the proposition. The more he considered, the more he liked what the PBR was doing.

The video was being made for all the right reasons. Maybe Vincent Danz, his beloved friend and sniper partner, also lost that day, could be in it. It was time to tell the story, Miller decided.

On September 12, down on the toxic smoking pile, 14 of Miller’s colleagues running into the raging belly of danger simply because it was their job, what they do, what was in their heart, were not to be found alive.

Miller had no idea the impromptu flag raising had been chronicled. He found out several weeks later when the video surfaced, and he was summoned to the commissioner’s office.

“It was a heavy hit on this country and on all of us,” Miller said. “We can’t forget those we lost.”

Bring tissues Saturday night, when you see that flag and “Never Forgotten” plays and cowboy hats come off and hands go over hearts and the fans of the PBR sing about the land of the free and the home of the brave.