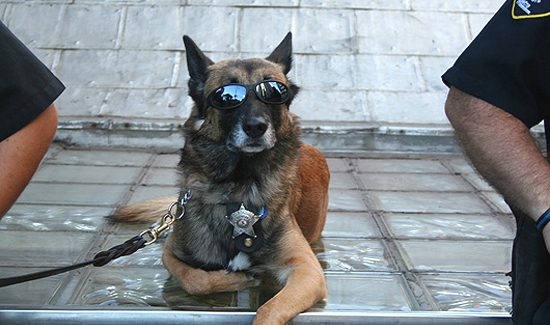 The San Joaquin County Sheriff’s office had a spot to fill in its canine unit, but not the immediate funds, so it was going to have to wait to complete its K-9 team.

That’s when a generous donor stepped forward, offering thousands of dollars for the purchase of a dog.

That dog, named Duke has arrived from Germany and has been bonding with his partner Deputy Mark Utterback.

The 2-year-old German shepherd has already learned how to leap from the ground through a window into Utterback’s vehicle.

“You live together, you work patrol every day, it’s just like having a partner in your car,” says Sgt. Paul Hoskins, a former canine officer.

“This is the second training he’s been to; this is the first day he’s actually jumped in and out of a patrol car, which is huge.”

Also huge is the price tag of these canines.

“It’s a force multiplier; it gives us an opportunity to have our deputies work in outlying areas, but have a canine partner.”

Down one K-9 team, the department was looking to complete its full team. Enter dog lover and generous donor Rogine Couch.

“I love animals, and I knew I would be able to donate to a department that would take good care of him.”

She donated nearly $10,000 so the department could purchase Duke, and says it’s worth every penny.

As the introductions were made, she was not disappointed.