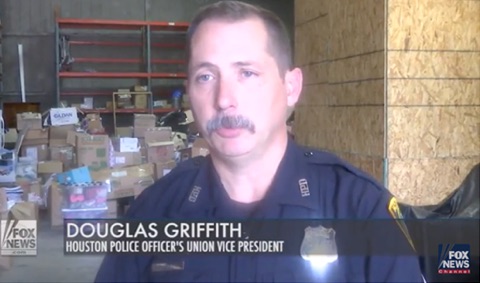 Donations from across the country are pouring in to the Houston Police Officers’ Union for members of the force whose lives were changed by Hurricane Harvey.

More than 500 Houston Police officers have been affected by flooding and more than 100 of them have completely lost their homes, according to the union.

In addition to helping police officers whose homes flooded, donations are also going to the family of Sgt. Steve Perez, who died in floodwaters on his way to work. He was on his way to help the department with water rescues.

“Just a class guy, very happy-go-lucky guy,” said Douglas Griffith, vice president of the union. “He will be missed within our department. I know several officers who worked for him and said he was a great supervisor.”

Many people are donating food, water, clothing and other everyday items in person, but money can be sent as well to AssistTheOfficer.com. One hundred percent of the proceeds goes to officers and their families in critical need of help.

“I can’t say enough about the people who have come out and helped us. We’ve had people delivering food to our officers every single day,” said Griffith. “I can’t tell you how blessed we’ve been with all the donations.”

Trinity Lutheran Church down the street from the police station is holding donations for officers and allowing officers to take showers. The church’s gym is set up like a store for officers to shop around and pick up what they need.

“This is our way of saying thanks, and we’re willing to share our space to help and be good neighbors too,” said Dorn.

Donations are now being sent to police departments near Corpus Christi and Rockport. Griffith said the storm destroyed the homes of all five police officers in the Port Aransas department.

Hurricane Harvey has been very difficult for Houston police, along with many other agencies. Some officers have still not gone home, they work mandatory 12-hour shifts and many have to clean up their flooded home in between. They’ve also dealt emotionally with the death of Sgt. Perez. But they’re hanging in there with support from the community.

“Our guys have stepped up and done a wonderful job. And I’m proud of every single one of them,” said Griffith.