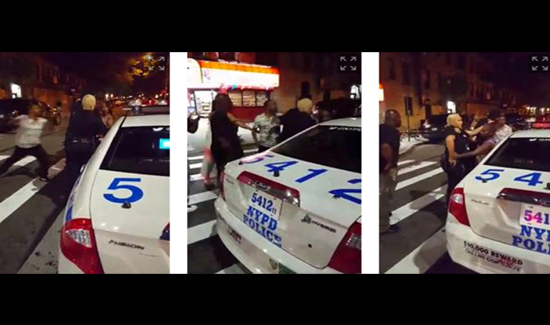 A cop trying to restrain a woman on an Upper Manhattan street was walloped in the head by an attacker, an online video posted to Facebook shows.

The officers spotted Terrell Mitchell, 26, with an open bottle of Hennessy on W. 144th St. and Frederick Douglass Blvd. on Friday at 11:30 p.m. But his sister, Asia Banks, 38, intervened when the two cops approached, police said.

As the cops tried to apprehend Banks, who was punching and scratching, Mitchell repeatedly sucker punched the male officer in the head from behind.

He fled but was nabbed nearby. Both he and his sister were charged with assaulting a cop.

Police said Banks had reached for the female officer’s gun during the scuffle.

The punched officer, whose glasses were knocked off in the attack, was treated for swelling and a cut to his mouth, police said. His partner suffered scratches to her arms, police said.

Give them the maximum for their attack and don’t candy coat any more assaults on Police Officers anywhere.

Strange but I never saw this in the lamestream media.