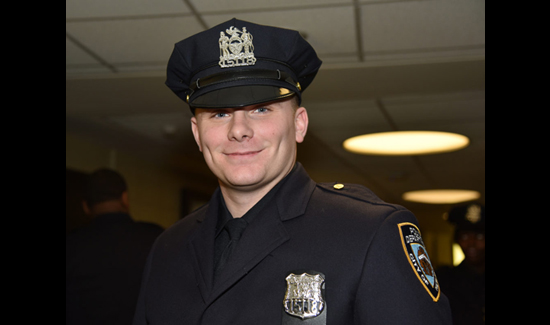 Officer Paradine, who graduated the NYPD Police Academy yesterday, was protecting our nation prior to deciding to become a protector of New York City.

Officer Paradine served in the United States Marine Corps and was deployed in Afghanistan. He received the Purple Heart Medal* for wounds he received in action when an improvised explosive device (IED) detonated in 2012.

When asked why he wanted to become a NYPD Police Officer, especially after serving our country and receiving the Purple Heart Medal, Officer Paradine replied without hesitation, “I served my country and now it’s time to serve the greatest city in the world.”

Officer Paradine is one of 555 new police officers that join thousands of other men and women of the NYPD who are protecting everyone in our city and connecting with those we are dedicated to keeping safe.

The Purple Heart is awarded to members of the armed forces of the U.S. who are wounded by an instrument of war in the hands of the enemy and posthumously to the next of kin in the name of those who are killed in action or die of wounds received in action. It is specifically a combat decoration.