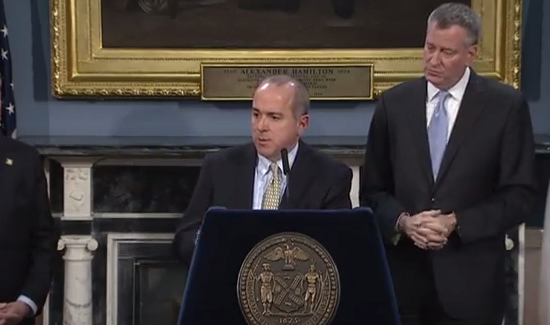 The Sergeants Benevolent Association in New York City has agreed on a contract with the city that gives 4,602 NYPD Sergeants an 11 percent raise over seven years. The $326 million deal goes back to August 2011 up to 2018.

“What we were able to do was realize that the issues facing the city of New York are much more important than Mayor de Blasio and Sergeant Ed Mullins,” noted the SBA president City Hall press conference. “He and I still have different beliefs in different areas, but we have common beliefs in other areas. Until you sit at a table and have an opportunity to have an uninterrupted conversation, you don’t get the ability to agree to disagree, and I think that’s what’s changed.”

Mayor Bill De Blasio, who has had a a rocky relationship with Mullins, put his arm around him at the press conference and said, ““I respect his leadership, I respect his intellect, I respect the fact that he raises serious issues in a serious way, and I think that’s how people can find common ground even if they don’t agree on everything to begin with.”

City officials said the cost was already accounted for in the budget and would be partially offset with $74 million in health-care savings.