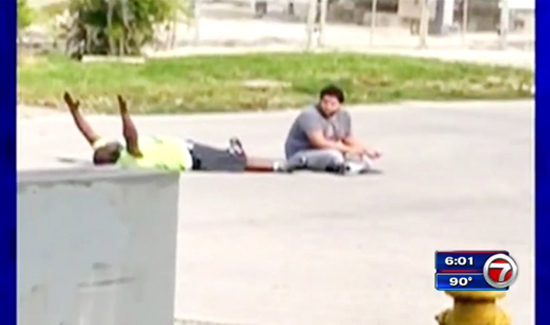 Rather than wait, John Rivera, president of the Dade County PBA, called a press conference to explain a tragic shooting and what really happened.

The Miami-Dade Police Union president said Thursday afternoon that Kinsey did everything right and that the North Miami Police officer was aiming for the patient out of fear that he had a gun and was planning to hurt Kinsey.

“The movement of the white individual looked like he was getting ready to charge a firearm into Mr. Kinsey,” said John Rivera, president of the Miami-Dade County Police Benevolent Association, “and the officer discharged, trying to strike and stop the white male, and unfortunately, he missed.”

Rivera released a statement from the officer that said in part: “I took this job to save lives and help people. I did what I had to do in a split second to accomplish that and hate to hear others paint me as something I’m not.”

“This is a case where a police officer was trying to save Mr. Kinsey’s life, and unfortunately, his shot went astray,” Rivera said.

Rivera also said his thoughts and prayers are with Kinsey.

this union functionary is appealing to his base. the fact is, the officer shot for no reason. a bystander, with binoculars told the police the object in the patient’s hands was not a gun–this was disregarded. also, he shot, and later handcuffed the “victim” of the supposed threat (explain this) and the officers at the scene refused to render first aid. not to mention, the abyssininally poor marksmanship of a trained SWAT officer. this just does not add up. i think the officer misreadthe situation/panicked and the police/union officals do not want to own up to it. the cover-up is always worse than the screw-up.