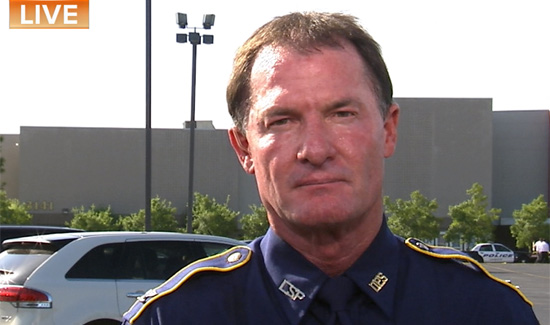 The incident, which happened in September 2015, resulted in the indictments of two marshals on second degree murder and second degree attempted murder charges.

The marshals began pursuing the car after they witnessed an argument between a man and his girlfriend in front of a local bar, a source told CNN. Officers moved to detain the man, identified as Christopher Few, who took off in his car.

The Superintendent of the Louisiana State Police called the video “the most disturbing thing I’ve seen.” It comes from a body camera worn by a separate officer, and shows back-up arriving, shots being fired, and the moment deputies realized they had killed a child.

The footage, which is very graphic in parts, shows a confused scene in which several officers discuss the situation and how best to proceed. An officer appears to say, “I don’t know who all fired,” to which another officer seems to respond, “I fired.”

The suspect, who is behind the wheel of a small white car, is hit but not killed. He presents his hands to the officers and eventually, slowly, crawls out of the car to lie on the asphalt.

Two officers can be heard discussing what to do next. One says, “You want me to call state police?” The other responds, “No listen. Get all these people away. And block this off over here,” gesturing to the road. ‘I never saw a kid in the car.’

A discussion about the suspect’s condition ensues, and an officer says, “I never saw a kid in the car, bro.” The officer wearing the camera says, “Yeah he’s ahh…the kid is…” but doesn’t finish his sentence.