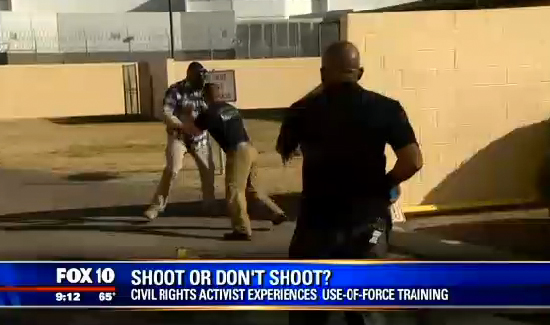 We’ve seen protests all across the country after police officers have been accused of shooting people who aren’t armed. But what would happen if one of those protesters got to see firsthand what it’s like to wear a badge and be put in a life-or-death situation?

Rev. Jarrett Maupin, an Arizona-based activist who has recently led marches on the Phoenix Police headquarters after officers shot an unarmed man who reportedly fought with them, found out first-hand, compliments of Fox News. Maupin agreed to go through a force-on-force training exercise with the Maricopa County Sheriff’s Office, going through three scenarios where he had to decide whether to shoot or not shoot.

Scenario one was a call of a man casing cars in a parking lot. Maupin approached the man and started asking questions. The suspect in the drill shot Maupin, who was asking him what kind of car he drove. It happened that fast.

Click here to watch how it all went down.