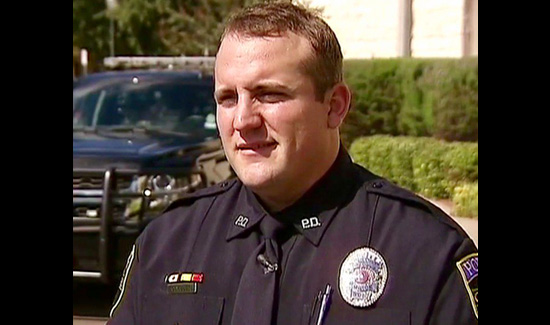 “My son is not breathing.”

Seconds after a distraught Texas father uttered those chilling words to a 911 operator, Officer Chase Miller was on his way.

He didn’t have to respond; the emergency dispatcher was already sending paramedics to the KFC in Granbury, Tex., where a 3-year-old boy was unresponsive and his sobbing mother was screaming his name: “Brayden, Brayden!”

But Miller — who just happened to be listening to the EMS dispatcher radio at the time — didn’t wait for the paramedics to arrive; instead, he rushed to the scene, knowing it was a short drive away.

A dash cam video captured at the scene and later posted on YouTube by the city of Granbury shows Miller pulling into the parking lot to find every parent’s worst nightmare playing out: A terrified mother holding her toddler’s limp body as the boy’s father and several other people attempt to revive him.

He responded exactly like we would hope an officer would respond,” Deputy Granbury Police Chief Jim Marshall said. “He was calm, and I truly believe that his calm demeanor helped stabilize the parents a little bit. At one point, he needed the father to take over chest compressions while he returned to his patrol vehicle.”

“Officer Miller knew from his training that the child would need a breathing mask to survive,” Marshall added.