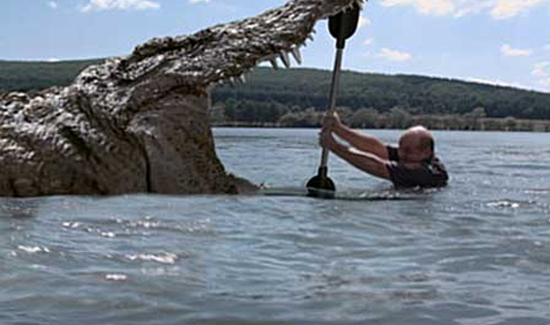 Every day in Florida feels like an epic man vs. beast struggle. But this time we get a first-person view!

And it’s all thanks to one brave Boynton Beach cop whose body camera recently caught his terrifying encounter with a particularly angry alligator.

According to a Facebook post police posted about the encounter, Officer Alfredo Vargas responded to a call from a homeowner who found a gator laying by his front door.

“Officer Vargas called the Florida Fish and Wildlife Conservation Commission and learned that it would be about 30 minutes before a trapper could arrive, and it was likely that the trapper would kill the alligator,” the post reads. “Officer Vargas said he didn’t want that to happen given his background with learning how to capture nuisance gators and return them to their natural habitat.”

So he put his gator training to use. And the frightening encounter was all caught on video.

When it was all done, the victorious officer put the bound alligator in the back seat of his patrol car and took him out to a canal where he removed the tape from around its mouth and put him back in the water.

“Officer Vargas doesn’t know it yet, but we’ve just made him the department’s official alligator wrestler (kidding but not really),” the post reads.