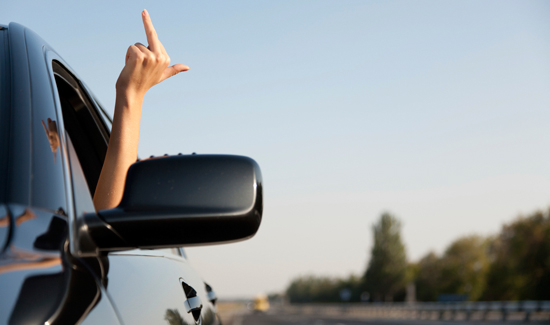 A foul-mouthed motorist pulled over for speeding has been put on blast by the Palm Beach County Sheriff’s Department, who posted dash cam video of the incident on its Facebook and Twitter feeds.

The woman who was stopped, identified only as a 62-year-old, was apparently doing 51 in a 20 mph school zone. When the officer hands her a $600 ticket, she says, “No wonder you people get shot.”

“What?” the angry woman barks back.

“You are being cited for speeding. This explains what your options are. Drive safe.”

“You know what?” the woman then says. “No wonder you people get shot. You’re absolute a**holes.”

“This is a deputy trying to make sure that children are safe and don’t get killed in a school zone,” Palm Beach County Sheriff Ric Bradshaw told the media Thursday. “He was doing his job. And I think it’s totally unacceptable for somebody to talk to a deputy or any law enforcement officer like that, when that’s what they are trying to do to protect our children.”

She should have gotten more than a ticket!!!

Pretty Sad….The officer was just doing his job. But what’s with the 600.00 ticket. That’s insane.