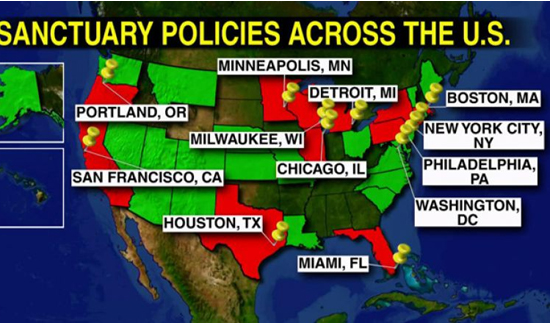 Ed. Note: President-elect Donald Trump enjoys a lot of political support in police circles. Unfortunately, those officers will be likely trying to “do more with less” if Trump cuts off federal funding to places the new administration considers “sanctuary cities.”

Cops who viewed Donald Trump as their law-and-order ally could now lose essential funding if the new president carries out his threat to crack down on cities that protect undocumented immigrants.

Their fear is rooted in a memo sent by the Department of Justice last summer to hundreds of law enforcement agencies, warning that they would be ineligible for large slices of federal funding if they violated a vaguely written law passed 20 years ago: Title 8, Section 1373 of United States Code.

Scores of cities, like New York, Chicago, Los Angeles, and New Haven, have countered Section 1373 with their own policies that aim to protect undocumented immigrants from the reach of federal deportation efforts.

No court has ruled on whether these so-called sanctuary cities are actually violating the law, and the Justice Department has not made a determination. The July memo didn’t clarify things, so officials in New Haven — a city on the forefront of sanctuary policies, according to Police Chief Anthony Campbell — weren’t worried at first.

Then, in August, candidate Trump declared that he would “end sanctuary cities” within his first 100 days in office by barring them from federal funding. Three months later, he was elected president, and now, the July memo has taken on a new and ominous meaning. If Section 1373 is enforced, sanctuary cities stand to lose hundreds of millions of dollars in federal law enforcement grants — grants that “mean the world to us,” said Campbell.

“We understand that the federal government can say, ‘you’re a sanctuary city’ and turn the tap off,” Campbell said.