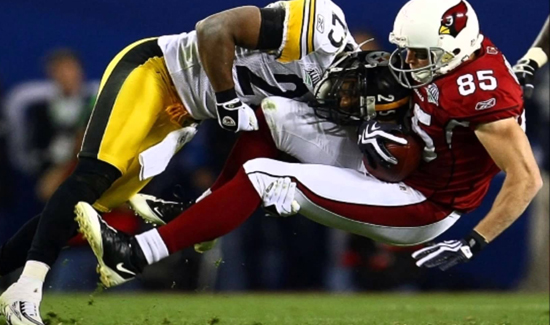 An officer channeled his inner NFL linebacker to stop a man who was using a baseball bat to strike the windows of a Southern California police department.

Security cameras captured the man repeatedly striking the front windows of the West Covina police station Monday. The man walked to the building’s lobby, armed with the bat, at 10:18 a.m. and began striking the windows.

Video showed three women who were seated in the lobby immediately run away from the windows.

An officer who had been outside of the building saw what was happening and seized his opportunity when the man had his back turned. Security camera video showed the officer sprinting up from behind and bringing the man down with a textbook tackle.

Other officers then assisted in taking the man into custody.

The suspect, identified as 28-year-old Christopher Rivas of West Covina, suffered minor injuries from the fall and was taken to a hospital for treatment, Lopez said.

No one was injured in the incident and the outer glass of the police department did not break, Lopez said.

Rivas was arrested on suspicion of assault with a deadly weapon and resisting arrest. He was later released to the custody of County-USC Medical Center for treatment and evaluation, Lopez said.