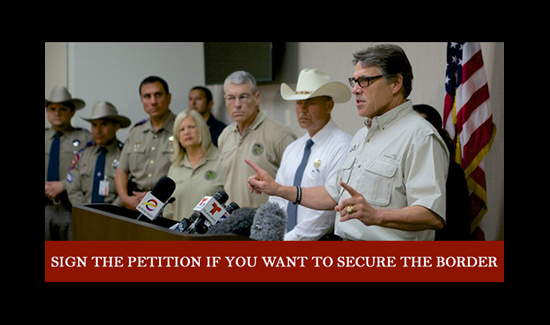 Rick Perry’s planned deployment of 1,000 National Guard troops to the border has earned him criticism from Democrats and Mexican officials alike.

But what’s really interesting is the mixed reaction he’s getting from local law enforcement.High-profile media types like Maricopa County Sheriff Joe Arpaio applaud the governor’s move to send troops to the border as “a show of force.”

Others dismiss the move as a cheap, political stunt from a guy that somehow still thinks he’s a viable candidate for president.

Arpaio told FOX News’ Neil Cavuto that he likes the idea of sending in the National Guard because it reminds him of his days working as a DEA agent in Mexico City.

“The National Guard, they’re not going there with machine guns. … So, why can’t we send the Border Patrol or the military across the border to work in a bilateral situation? I can’t understand why they are afraid of the National Guard in the United States at the border. It doesn’t make sense.”

Almost seeming to sense that his words failed to agree with each other, Arpaio concluded by saying the following: “But it does make sense. They don’t like anything we’re doing here.”

So it makes no sense but it does make sense – plain and simple.

Other border sheriffs panned the Perry stage craft of sending unarmed national guardsmen without powers of arrest or immigration expertise as little more than political theater designed to win the support of likely voters in upcoming elections.

The sheriffs were not even consulted about the governor’s plan. And that’s just for starters.

“At this time, a lot of people do things for political reasons,” Cameron County Sheriff Omar Lucio told the Dallas Morning News. “I don’t know that it helps.”

“I don’t know what good they can do,” he explained. “You just can’t come out here and be a police officer.”

Referring to whom and deterring from what are obviously separate questions.

Some have suggested that beefing up sheriff’s offices and providing some federal help to hire more cops along the border might be a wiser move than sending in guardsmen without weapons, powers of arrest or even a clear-cut mission beyond “assisting with the mission of referring and deterring.”

After all, if someone is already in the country illegally, it’s very difficult to deter that individuals from entering the country without proper documentation.

But for guys like Sheriff Joe and Governor Perry, the border crisis isn’t so much a problem that needs to be addressed and solved. It’s more like a great opportunity to get some face-time on television and sure up the base for the next election cycle.

To see Governor Perry and FOX News personality Sean Hannity on the border see the video below: