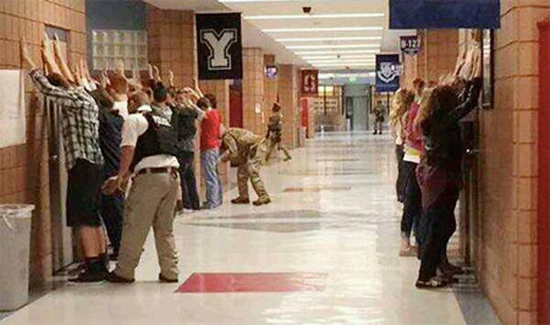 No drugs were found in a search of Worth County High School in Georgia Friday; a search that has the community buzzing.

Students went home to tell parents that not only did law enforcement search the school for drugs, but their persons were patted down by officers.

Worth Co. Sheriff Jeff Hobby declined to go on camera, but talked about the search in a telephone interview.

The sheriff requested drug-sniffing dogs from the state, and the Crisp County Sheriff sent K-9 units.

When asked about the pat down of students, and the notion of probable cause, Hobby said that as long as a school administrator was present, the personal search of the children was legal.

Tommy Coleman, attorney for the Worth County School Board, responded to Hobby’s statement.

Coleman clarified that those conducting the search would need particular circumstances or facts to justify it.

The Sylvester Police Department did a search on March 17, and found no drugs.

When asked about that previous search that came up dry, Hobby said he didn’t think that search was thorough, so he decided to do his own.

He said he believes there are drugs at the high school and the middle school, but also said that he will not do another search, due to response from community.

He said he felt the search was necessary.

At the end of March 11 people and several juveniles were taken into custody for a series of burglaries on Woodcrest Road. He road during those investigations, Worth County investigators found evidence there were drug activities going on at school.

Drugs dogs led officers to one car, which yielded nothing.

Interim Worth County Superintendent Lawrence Walters said he understands parents concerns about the drug search at Worth County High school on Friday.

“I’ve never been involved with anything like that ever in the past 21 years and I don’t condone it,” said Walters.

Walters said in March Sheriff Jeff Hobby told him his department was going to do a drug search at the school after spring break.

“We did not give permission but they didn’t as for permission, he just said, the sheriff, that he was going to do it after spring break,” said Walters.

Walters assumed the search would be similar to ones he had seen in his 40 plus years in education.

From his experiences, the way Friday’s search was done unusual.

“Under no circumstances did we approve touching any students,” explained Walters.

Walters said K9’s were brought in. Then, each student was pat down by deputies.

Parents said the same thing. Many claim their students were patted down aggressively.

In the student handbook it says school officials may search a student if there is reasonable suspicion the student has an illegal item. Hobby says he was able to search every student, simply because he had an administrator with him.

Worth County Schools attorney Tommy Coleman said in order for the Sheriff’s office to search any students, they’d had to have reason to believe there was some kind of criminal activity or the student had possession of contraband or drugs.

“If you don’t have that then this search would violate an individuals rights,” said Coleman. “[It] violates the constitutional right and enforcing them the right against unreasonable search and seizures.”