If there’s ever been an understatement, it’s that 2020 has been an eventful year for law enforcement. Between pandemic response and calls for police reform, agencies have had their hands full not only in the day-to-day job of keeping our communities safe, but in the need to defend their reputation in the wake of increased public scrutiny. Often, the scrutiny isn’t even directed at you, but rather at another agency hundreds or thousands of miles away. The reality of today is that all 18,000 police departments in the U.S. are being perceived by the public as one entity, driven by an increase in social media attention to any police activity.

You may think that the last thing you need to be dealing with amid a never-ending crisis is social media, but I argue it should be at the top of every chief’s list. It’s quite simple when you think of it: Law enforcement needs the trust of the public in order to effectively fight crime, and the battle for that trust isn’t fought on the streets, it’s fought online. If you think social media isn’t important to your agency, just ask yourself if you’ve faced any difficulties this year due to an incident of police misconduct that occurred in another city or state. If you’ve faced protests, calls for reform, problems with morale and recruitment and political scrutiny, you can be sure that social media played a major role. 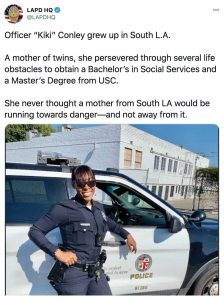 Unfortunately for law enforcement, just being on social media isn’t enough. The sensitivity of this particular time in history, combined with an unprecedented amount of information overwhelming our attention spans, requires police departments to communicate like pros in order to get their message across. While creating a great social media presence doesn’t necessarily mean investing heavily in equipment or personnel, it does mean educating ourselves on best practices for effective communications.

First and foremost, police need to change the mindset about social media from something that is nice to have to an integral part of the overall department strategy. This means incorporating communications into all aspects of decision-making and ensuring that public perception is not an afterthought when creating policy or taking police action. Of course, there will be times when public perception takes a back seat to public safety as it should, but it should still be taken into account as we’ve seen how influential it is in the long and short term.

Law enforcement needs the trust of  the public in order to effectively fight crime, and the battle for that trust isn’t fought on the streets, it’s fought online.

Additionally, social media communications shouldn’t be done “on the fly” but rather in a strategic and focused manner. Police departments should assess their agency goals and needs and incorporate those into a messaging strategy. For example, if the main priority is recruitment and officer morale, social media communications should support those initiatives and complement overall efforts. Strategy is also useful in the event of an emergency; if the last few years have taught us anything, it’s that departments big and small can all of a sudden find themselves in the national and even international spotlight. Once a crisis hits, it’s too late to start planning, so agencies would be wise to create an emergency communications strategy that will allow them to navigate comfortably through anything, from an officer-involved shooting to a viral video gone wrong. You may be tempted to remain silent during an emergency, but rest assured that if you’re not out there telling your story, someone else will tell it for you. In today’s world, having no response is a response in itself, and the better prepared you are for a crisis, the more likely you are to be able to address it in time to insert your input and information into the narrative. 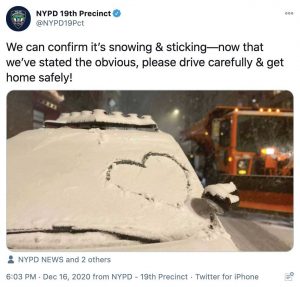 A good social media presence also requires a commitment to transparency and authenticity. These may sound like two overused buzzwords, but the meaning is one that every agency should get behind. Transparency means communicating both the good and the bad and increasing trust by being forthcoming with information, treating the community as partners in the public safety effort. Authenticity is something many officers are naturally comfortable with, meaning connecting in an engaging and human manner. While it may seem counterintuitive, social media communications for police should take a slightly informal tone, one that is respectful and professional, but also reminds the audience that there are human beings behind the badge.

If you find the concept of diving in the water or doubling down on your existing social media presence terrifying, that’s OK. There is permanency to everything we put online, and our entire profession is under the microscope. However, I can assure you that not participating is far more dangerous. Conversations about your agency are happening with or without you, and your voice is needed online now more than ever.