In January 1997, when I joined the incoming class of the Essex County, New Jersey, Police Academy, it was one of the proudest moments of my life. I started my enforcement career working as a meter maid and never expected to become a police officer. Having previously worked in social work helping communities navigate the 1980s crack epidemic, I developed skills for working well with people, especially those who were going through hard times. People began suggesting that I give policing a try. So I did.

Once I was in the Academy, I immediately realized that not only was I one of maybe six women, but one of even fewer Black women. This put me in a challenging position. In a male-dominated Academy with only one female instructor who sat in the office doing paperwork, I always felt that I had to prove myself. I had to run the fastest, get the highest grades on exams and show that I belonged there like everyone else.

During this time, the O.J. Simpson verdict came down. There were very high tensions that seemed to cut down racial lines. I was made to feel like I had something to do with the verdict merely by being Black. I was hoping that as a law-and-order Academy we could have our opinions but remain impartial. It was during that time that I got into a heated discussion and was called a racist slur by one of my classmates. We both were penalized. But it showed me that the world I was stepping into was not all fairness and justice. In fact, years later, that same officer would have many formal complaints lodged against him for racially profiling members of the community.

I was hoping for a forever bond with my Academy mates because we should operate as a blue family. That did not materialize. I prayed that actually being on the job would be different and that I would be able to make a difference in my community.

The first five years of working in my department were frustrating. I was one of only two Black women, and I was not embraced by everyone. It was hard trying to fit in. The other Black woman did not immediately connect with me because she had already been accepted as one of the boys. She was young, was able to hang out at the bars with other officers and cussed like a sailor. I was 30 years old, which made me much older than many officers and gave me a different view of the world. I was also married and had two children. Raising a family as an officer was hard. The hours were a challenge. I struggled to get dinner on the table and my girls to bed. I often had to work overtime, which I knew was part of the job, but there was no relief for having to balance taking care of my children. One senior supervisor even said outright that women should not be in policing. He would harass me and inspect everything I did with a fine-tooth comb.

I was often categorized as a double minority when talks of diversity in the department were brought up. I was female and Black, thereby leveling the idea that my department was racist. But I often felt that I had no value in the department as a Black woman, often feeling more like a place marker for the department’s statistics.

As a Black female officer, I faced challenges inside the department, but out in the field it wasn’t much easier. Male offenders on the street would often try and sweet talk to me or roughly handle me during interactions. If they were Black, they would say, “I should be ashamed of myself doing this job, locking Blacks up.” I remember getting constant catcalls when I was patrolling the streets and being told I was “too pretty to be a cop.” I also experienced judgment when some people in the public would see me and my husband in town and would comment that they thought I was gay because my career choice was so masculine and male dominated.

As time progressed, I began connecting with minorities in our community and paying attention to their complaints. There were times when I responded to calls of the older minority generation or the very young and they were happy to see me. The older generation always complained that our department was not diverse enough and that we did not reflect our community. I realized that there were things I could do to make this career work and that I could stop counting down the days to retirement.

While I often found myself caught in between two worlds being Black and blue, I knew I had a responsibility as a Black female officer to bridge the gap. I made it my business to change the attitudes of youth and community members about policing.

I recognized that the community I was in would need a superhero for the youth, especially those from low socioeconomic areas where a majority of minorities lived. I felt they needed to see someone who looked like them interacting with them. They needed to experience policing with fairness, honesty and compassion. I began getting fully engaged with the community while assigned to the community policing unit. I would volunteer my time for events and create events such as school supply drives and trunk or treats that would not only positively impact and serve minority communities but wealthy communities as well. I worked diligently to get officers who would not otherwise get personally involved with our most troubled minority youth to see that it was an important task.

My idea was “one town, one goal,” and I realized that I was where I needed to be. Once I was able to get both the department and the community to see me for who I was — not just Black, not just blue and not just a woman — I was a triple threat and a force to be reckoned with. I was a well-trained compassionate human being dedicated to protecting and serving the community.

My 22 years in law enforcement were challenging, exciting and rewarding. I joined several women in policing organizations, sat on boards, received awards and formed some great life-long bonds with both women of color and my white counterparts. We all had the same things in common. We were always outnumbered and often had to fight just to be seen and heard in our departments. Over the years, many programs have been introduced that are geared toward mentoring women for higher positions within the departments, as well as for support for longevity and survival in our chosen profession. Although our numbers have increased in the ranks, we are still far behind our male counterparts, especially Black female executives. Although we are qualified, we are often overlooked, which makes it important to continue having female executive programs and organizations that mentor younger female officers in leadership roles.

I am forever thankful for Georgia Ann Robinson, who was the first Black female officer hired by the Los Angeles Police Department in 1919. I hope that we as Black women are making her proud by making a difference in policing.

I retired in 2018, and I must say, it was an amazing career journey. I learned to love it with everything that I am. I am proud of my achievements as well as the lasting legacy and impression that I left in my department and the township that I represented. It is important that the value of diversity is not just box-checking, but the inspiration of Georgia Anne Robinson as a call for the future of policing to fully include officers of all genders and backgrounds in order to live out the ideal of law enforcement in partnership with the people.

I ran across an article regarding police agencies making a pledge. The 30×30 pledge is a coalition of police leaders, researchers and professional organizations who have joined together to advance the representation and experiences of women in policing agencies across the country. Their goal is to increase the representation of women in police recruit classes to 30% by 2030, and to ensure police policies and culture intentionally support the success of qualified female officers throughout their careers. This movement is right on track with the types of support and representation that women and communities need. 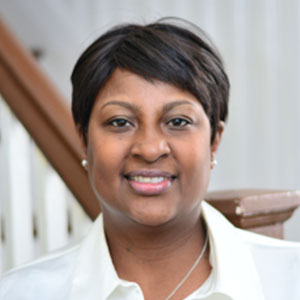 Det. Kim L. Nelson-Edwards retired in 2018 after 23 years with the Montclair Police Department. She worked in the Community Policing Bureau, was a field training officer and was the only female assigned to the Motorcycle Unit. She served as a school resource officer at Montclair High School for 17 years. She works closely with the National Organization of Black Law Enforcement Executives (NOBLE) and trains for Insight Policing: Conflict Resolution for Law Enforcement (www.insightpolicing.com).